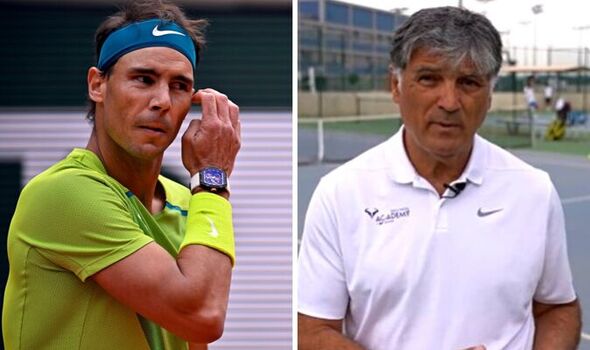 Rafael Nadal’s uncle and former coach has claimed that he would be happy for his nephew to lose the French Open final to Casper Ruud if he had to suffer defeat. It comes after Toni Nadal admitted that he wanted his own charge Felix Auger-Aliassime to lose to the world No 5 in their fourth-round match earlier in the tournament.

Nadal will be competing in his 14th final at Roland Garros, while Ruud is playing in a Grand Slam final for the very first time. The Spaniard is seeking a record-extending 14th title in Paris and 22nd overall Major trophy, but his uncle has now claimed that the Norwegian is the best opponent for his nephew to lose to if he has to lose it.

“I know it will be a difficult match for both of them, but if Rafael has to lose, better with Casper,” uncle Toni said ahead of the final, with Ruud one of the players who had come through the Rafa Nadal Academy in Mallorca, of which he is the director. The 61-year-old coached his nephew until 2018 and now works with ATP world No 9 Auger-Aliassime.

But Toni had snubbed his own player in favour of Nadal when the pair faced off in the fourth round, admitting that the Canadian knew he wanted his own nephew to win. And the coach doubled-down on his comments after the fifth seed was already safely through to the semi-final days later.

“I had a deal with Felix in which I wouldn’t sit in his box in the case he faced Rafa. He knew I wanted Rafa to win and didn’t even go to his last practices before that match. If he didn’t accept that, I would stop coaching him right away, but he is a good kid,” he said after Nadal defeated Novak Djokovic in the quarter-final.

It seems the Mallorcan has now made a U-turn and decided he wouldn’t mind seeing his nephew lose to someone, with Ruud the exception. And Toni said it would also be best for Ruud to lose to Nadal if he had to lose his first Major final with the 23-year-old admitting the Spaniard was his “idol”.

“And if he has to lose, better with Rafael because he already said he was his idol,” he continued. “It is a double happiness that Rafael plays a new Roland Garros final and that his rival is Casper Ruud, another player who has also trained here.”

According to Toni, the Norwegian arrived at the academy when he was ranked down at “like 140 or 150” in the world and is now a solid top-10 player, having qualified for the ATP Finals last season before making his first Masters final in Miami this year, and now reaching a maiden Grand Slam final. “We are totally proud of this collaboration and on top of that we are lucky to have worked with one of the most educated players on the professional circuit,” Nadal’s uncle concluded.