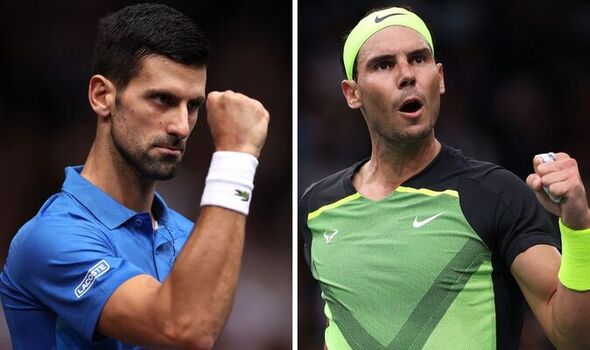 Novak Djokovic has helped Rafael Nadal out in the race for the year-end No 1 ranking after defeating Stefanos Tsitsipas at the Paris Masters. With current world No 1 Carlos Alcaraz ending his season early through injury, the 36-year-old has a clear path to securing the year-end top ranking for the sixth time.

Alcaraz, Nadal and Tsitsipas are in a three-man race for the year-end No 1 ranking, with all three men out of the Paris Masters and current top-ranked man Alcaraz ending his season early through injury. It means that the current world Nos 2 and 5 will be playing for the ranking in Turin with the 19-year-old absent.

And Nadal’s chances of securing the ranking have become even easier following Tsitsipas’ loss at the Paris Masters, as Djokovic defeated him 6-2 3-6 7-6(4) in the semi-finals on Saturday. The 36-year-old will overtake the Serb as the oldest year-end No 1 in history if he can secure the ranking after receiving a boost from his long-time rival.

To end 2022 as the world No 1, the 22-time Grand Slam champion must either reach the final of the ATP Finals after going undefeated in his three round-robin matches over the week, or he must win the title if he goes either 2-1 or 1-2 in his three group matches in the week.

JUST IN: Novak Djokovic fires warning to Holger Rune ahead of Paris final

Meanwhile, Tsitsipas will have to win the title undefeated if he wants to become world No 1 for the first time in his career and secure the ranking for the end of the season. If the 24-year-old manages to win all five matches in Turin and beats Nadal in the final – who must also go undefeated during the week – then Tsitsipas will be world No 1, Nadal will be No 2 and Alcaraz will be No 3.

It could mean that the ranking comes down to the final match of the season for the first time in six years. Back in 2016, Djokovic and Andy Murray were in a two-man race for year-end No 1 after going undefeated in their round-robin matches over the week when the ATP Finals were staged in London, and it was the Brit who secure the year-end top rank for the first and only time in his career as he beat the Serb in the final.

Nadal had also been in with a shot at the world No 1 ranking this week in Paris but he needed to win the title and have Alcaraz lose before the quarter-final stage. Instead, the world No 2 lost his opening match to Tommy Paul in three sets after leading by a set-and-a-break, while the 19-year-old made the quarter-finals where he got injured and retired.

The injury proved costly for Alcaraz, who announced on Saturday that he had torn his abdomen and would be sidelined for six weeks, ruling him out of both the ATP Finals and the Davis Cup Finals. While Nadal had a shot at the top ranking, he said he wasn’t interested in fighting to be world No 1 anymore.

“Something that I said since long time ago: I will not fight anymore to be No 1,” the 36-year-old said when he arrived in Paris-Bercy. “I did in the past. I achieved that goal a couple of times of my career that I have been very, very happy and proud about achieving that. But I am in a moment of my tennis career that I don’t fight to be No 1.”