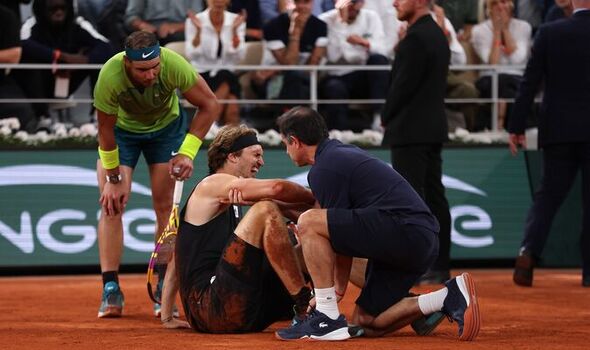 Rafael Nadal sent a message to Alexander Zverev after the third seed was forced to retire injured after distressing scenes in their French Open semi-final. The German was heard screaming and crying as he went down on his ankle, being taken off court in a wheelchair before emerging on crutches to retire, and the 21-time Major champion told the 25-year-old that he would become a multiple Grand Slam champion soon enough.

Nadal and Zverev had reached 6-6 in the second set when the German went down on his ankle, crying out in pain and being taken off court in a wheelchair. He came back onto Court Philippe-Chatrier on crutches to shake his opponent’s hand and retire after three hours on court, with the Spaniard leading 7-6(8) 6-6.

It meant the world No 5 advanced to his 14th final in Paris but Nadal focused on his opponent in his post-match interview, sending him a heartfelt message. “Well very tough and very sad for him,” the 36-year-old told Mats Wilander.

“Honestly he was playing an unbelievable tournament, he’s a very good colleague on the tour. I know how much he’s fighting to win a Grand Slam but for the moment he was very unlucky and the only thing that I am sure is [that] he [is] gonna win not one, much more than one,” he claimed. “So I wish him all the very best and very fast recovery.”

Nadal, who turned 36 today, also said he was in the medical room with Zverev before the pair re-emerged to end the match and admitted it was distressing to hear his opponent cry. “I have been there in the small room with Sascha before we came back on court and [to] see him crying there, it’s a very tough moment so just all the best to him and all the team,” he said on court.

The 13-time champion also praised Zverev’s form in the match, as the German led by a break in the opening set and had six set points in the tiebreak before Nadal took it, and served for the second at 5-3 before being broken. Nadal said: “Yeah, have been a super tough match. Over three hours and we even didn’t finish the second set.”