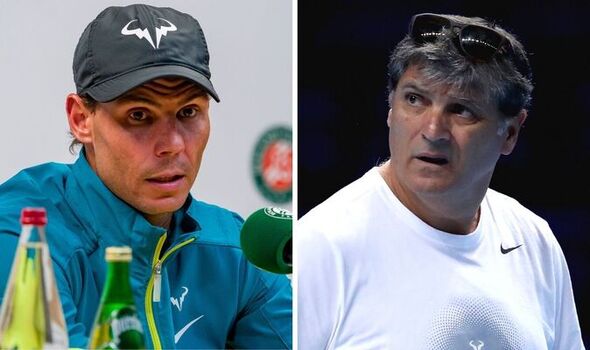 Rafael Nadal’s former coach and uncle Toni has weighed in after the world No 5 admitted his quarter-final clash with Novak Djokovic could be his “last match” at the French Open. The Spaniard has been dealing with a chronic foot injury since he was 19 that appears to have worsened in the last year.

Nadal sparked retirement fears as he looked ahead to Tuesday’s quarter-final with Djokovic, saying: “Being honest, every match that I play here I do not know if it will be the last match here in Roland Garros in my tennis career. That is my situation now. I went through a tough process again with my foot.”

But his uncle Toni, who served as his coach until 2018 and now mentors Felix Auger-Aliassime – the man Nadal beat in five sets during the fourth-round – has shared his hope that his nephew will still return to the French Open again. Speaking to Onda Cero about the tournament’s decision to schedule Djokovic and Nadal as the night session, he said: “It is more logical that it was played during the day but I am confident that this will not be his last Roland Garros.”

But the 61-year-old sounded less certain when the 13-time French Open champion’s comments about his “last match” in Paris were put to him. “I hope so but I don’t know,” he confessed. “I haven’t talked about it more than necessary with him. I hope he controls his problems and continues playing for some more time.”

JUST IN: Djokovic blamed for Tsitsipas demise as star ‘argues with mum and dad’

The current coach of the world No 9 admitted that things were getting trickier for his nephew with his Mueller-Weiss syndrome – the chronic foot injury – but thought he’d still be able to manage it and be back at the French Open again. “When you are in these tournaments, you go to the limit and Rafa is going to do it again. Every year it is more difficult but I think there is time to recover,” he said.

“When you have more pain than you should, it tires you out. Rafael competes because he thinks he has a chance of victory, but with pain the options are reduced and you can’t make an effort like this every year.”

As for the man himself, Nadal is trying to enjoy every moment after admitting he doesn’t know when he could be playing his final match. “I do not know what will happen in the near future with my career,” he said.

“So I am just trying to enjoy and fight as much as I can to keep living the dream. I hope to give myself a chance to play at the highest level possible and then let’s see.”