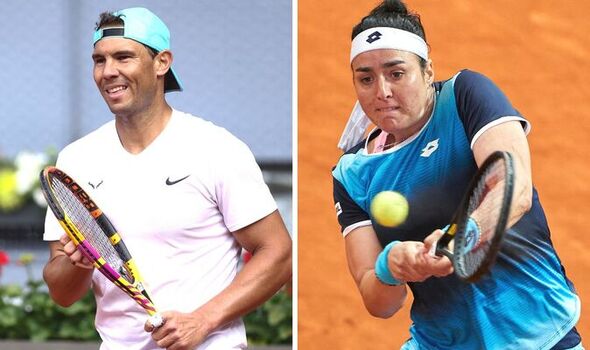 WTA world No 10 Ons Jabeur has issued a plea to Rafael Nadal ahead of the second leg of Real Madrid and Manchester City’s Champions League semi-final. The Tunisian is the highest-ranked player left in the women’s draw but has been forced to turn to the Spaniard in hopes of getting a ticket for the showdown.

Jabeur has joked that Real Madrid “need” her support after she booked her place in the Madrid Open quarter-finals with a win over Olympic champion Belinda Bencic. The world No 10 was hoping to make the most of her time in the city home to her favourite team, and turned to Nadal after the world No 4 took the honorary kick off in Real Madrid’s La Liga game against Espanyol on Saturday.

The 27-year-old said she had wanted to join Nadal at Saturday’s game and is now requesting some tickets for Wednesday’s Champions League clash. “It feels very special here, especially in a city that I love so much, with Real Madrid winning La Liga the other day, so maybe it’s my time,” she joked after her third-round victory. “I wanted to go with Rafa but he didn’t invite me unfortunately. I don’t have any tickets or anything for Wednesday but I know a nice person whose name is Rafael Nadal who has access.”

Proposing a suggestion to the 21-time Major champion, Jabeur laughed: “I’m just going to put it out there; Rafa if you need a plus one or two or three – because my coach and my husband want to go – you can ask the tournament to schedule our matches at the same time so we could go together to support Real Madrid against Man City. They need me, they need my support. Come on, Hala Madrid!”

JUST IN: Djokovic opponent Monfils downplays concerns over Serb ahead of clash

Nadal was joined by Carlos Alcaraz to witness Real Madrid’s 35th La Liga title win on Saturday, watching on from the box and joining in with the celebrations on the pitch. The world No 4 has also been scheduled for the day session match on Wednesday, so it won’t clash with Real Madrid’s Champions League game.

Madrid Open tournament director and world No 114 Feliciano Lopez admitted he wanted to try and get to the game, revealing that Nadal had requested not to play in the evening. It has been a long time since I’ve been to the Bernabeu and it is a game I’d like to go to. Let’s see if I can escape to see the game against Manchester City,” he said.

“Rafael Nadal wants to play during the day in Madrid so that the ball bounces higher, but with the semi-final he joked about not playing at night.” He will face the winner of a clash between Miomir Kecmanovic and Alexander Bublik in Wednesday’s day session.

Meanwhile Jabeur, the only top 10 player left in the women’s draw, faces two-time former champion Simona Halep in the quarter-final on Wednesday, in a match that is yet to be scheduled. The Tunisian will be hoping her request is granted so she doesn’t have to miss the second league of the Champions League semi-final to attempt to book her own place in the Madrid semis.