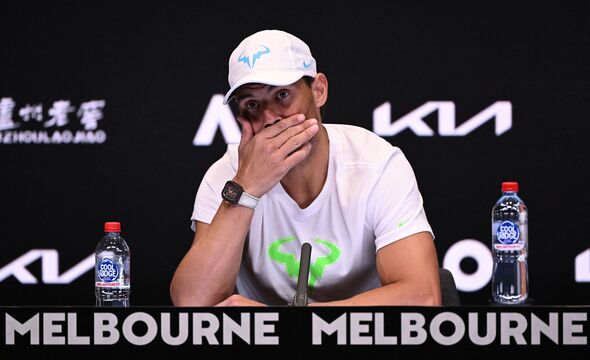 Rafael Nadal has admitted that he’s not 100 per cent sure that he will back on a tennis court following his latest injury setback at the Australian Open. The No 1 seed suffered a shock defeat to MacKenzie McDonald in the second round of the Grand Slam on Wednesday, but the biggest story from the match was the injury he suffered early in the tie.

The Spaniard was seen wincing in pain, clutching at his troublesome hip on several occasions. His wife was seen crying in the player’s box and Nadal even stopped talking to his coaching staff at one stage with it being clear he was not going to be competitive in the match.

Despite a spirited fightback in the third set, Nadal was unable to challenge McDonald to prolong the match. He looked in some discomfort as he made his way down the tunnel on Rod Laver Arena with fears that Nadal now faces another long spell on the recovery table.

It’s the latest in a long line of injuries Nadal has had to deal with over the past few years. He managed to battle through the pain in 2022 before taking several months off to recover in time for the Australian Open.

And while Nadal is hopeful that he can once again make a comeback on tour, he admits to not being 100 per cent about it. “I don’t need to talk and explain the feelings,” he said.

“It was not the right moment to have something like this now. At the end, you need to keep going, no? Sometimes it’s frustrating. Sometimes it’s difficult to accept. Sometimes you feel super tired about all this stuff in terms of injuries.

“Yeah, can’t come here or can’t come here and say, lying, that the life is fantastic and staying positive and keep fighting. Not now. Tomorrow starts another day. Now it’s a tough moment. It’s a tough day, and you need to accept that, and keep going.

“You know, in the end, I can’t complain about my life at all. So just in terms of sports and in terms of injuries and tough moments, I mean, that’s another one. Just can’t say that I am not destroyed mentally at this time, because I will be lying. Yeah, it’s hard for me, you know. But let’s see. I mean, hopefully is nothing too bad. In the end have been three positive weeks in terms of practice.

“So I really hope that that don’t put me out of the court for a long time, because then it’s tough to make all the recovery again. Is not only the recovery. It’s all the amount of work that you need to put together to come back at a decent level.

“So I went through this process too many times in my career, and I am ready to keep doing, I think, but that’s not easy, without a doubt.”