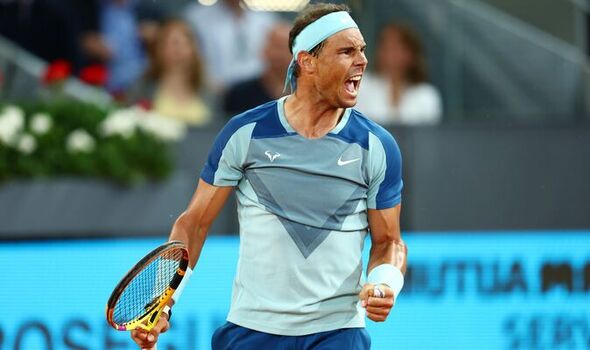 Rafael Nadal has been told it is a “miracle” he is competing in Madrid after his 6-1 7-6(4) win over Miomir Kecmanovic. The world No 4 was playing his first match in 45 days after breaking his rib in Indian Wells.

Nadal has been hailed for returning to action in Madrid, 45 days after his last match in Indian Wells that he was forced to play with a broken rib. The Spaniard picked up the injury in his semi-final before losing the championship match to Taylor Fritz the following day and had been out of action since, making a winning return on Wednesday against Kecmanovic.

After the match, retired former WTA world No 5 Daniela Hantuchova said it was a “miracle” the 35-year-old was already back in action, having broken her own rib three times in the past. “It’s unbelievable,” she told Prime Video.

“When I heard it was the rib, since I had mine broken three times, I know how long it takes. And to see him here in Madrid, I think it’s a miracle.” The seven-time tour title winner also thought Nadal himself had not been expecting to return to competition so soon, something that would have helped him in his opening match against the world No 32.

JUST IN: Djokovic responds after ex-coach fails to warn him about new player

“I think he was not expecting himself to be here and that gave him that freedom, especially in the first set he was really free, not really knowing whether he can kind of trust his body or not,” she continued. Hantuchova also thought there were positive signs for the week ahead as Nadal continues his comeback and looks to build momentum ahead of the French Open.

She added: “And great news for all Rafa fans because if he is able to pull off a victory in two sets against Kecmanovic, not knowing how his rib is going to feel, I can’t even imagine how much begged he’s going to get as the tournament progresses.”

Nadal will next face David Goffin on Thursday, with the Spaniard leading their head-to-head 4-2. All four of Nadal’s wins over the Belgian have come on clay, including in Madrid back in 2017.

Carlos Alcaraz could await in the quarter-finals if both players can get there, with Novak Djokovic also in the same half as a potential semi-finals opponent.