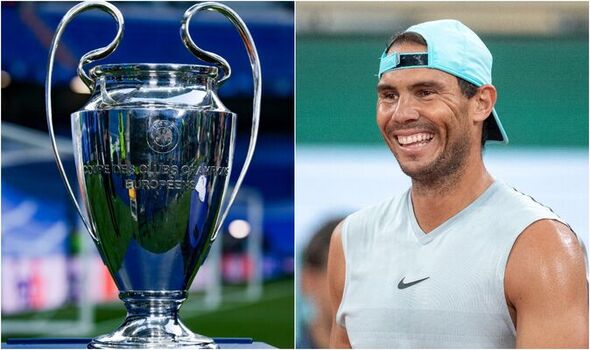 Real Madrid fan Rafael Nadal claims that he has his Champions League final tickets at the ready, despite the fact it will kick off midway through the French Open. The ‘King of Clay’ has claimed glory at Roland Garros a staggering 13 times, but may well be hedging his bets after battling injuries on his way into the tournament.

Nadal’s preparation for this month’s French Open has been hampered by rib and foot injuries. Novak Djokovic may be licking his lips as a result, along with teenage sensation Carlos Alcaraz, although all three of the tournament favourites will battle it out in the same half of the draw.

Djokovic is forecasted to meet Nadal in the quarter-finals if everything goes to plan, which could mean an early exit for the Spaniard. Indeed, the Serb inflicted the third French Open defeat of Nadal’s career last year en route to claiming another Grand Slam.

This year’s French Open is set to clash with the Champions League final, which will be contested between Liverpool and Nadal’s beloved Los Blancos. “I am here to play… but I have my tickets ready,” he admitted on Friday ahead of the French Open.

Madrid produced dramatic, battling performances against Paris Saint-Germain, Chelsea and Manchester City to reach the final, so toppling Liverpool at the last hurdle would complete a fairytale run. But the May 28 showdown is set to clash with the third round of the men’s singles draw, meaning Nadal would likely have to suffer an early exit to make the match.

The 21-time Grand Slam champion’s projected route does include a potential second-round tie against Stan Wawrinka. The 37-year-old has three Grand Slam titles on his resume but has slipped outside the world’s top 200.

Further on in Nadal’s projected collision course to French Open glory, he may have to face Felix Auger Aliassime, Djokovic and Alcaraz if he is to power all the way to the final. Daniil Medvedev or Stefanos Tsitsipas would be the most likely opponents if he gets there as the duo have landed themselves on the much easier side of the draw.

On Friday, Nadal fired a warning to the sport’s big hitters that he is only turning out at Roland Garros because he believes he can win a 14th title. However, he also discussed living with a persistent foot injury which could throw a spanner in the works and leave the door ajar for his competitors.

“I feel better,” he claimed. “That’s why I’m here. The pain is always there. It’s not about to disappear now. It’s about if the pain is high and strong enough to allow me to play with real chances or not.

“It is something that I live every day so it is nothing new for me and is not a big surprise. So I am here just to play tennis and to try to make the best result possible here in Roland Garros. And if I don’t believe that this thing can happen, probably I would not be here.”