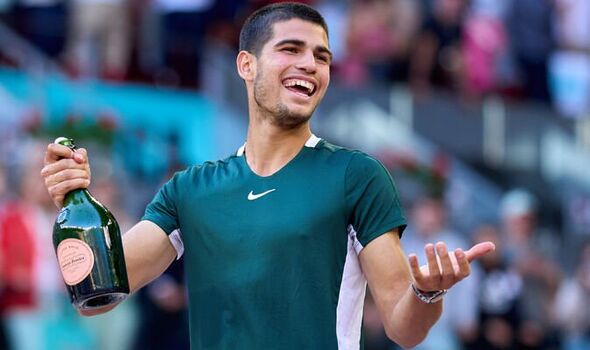 Carlos Alcaraz has been backed to beat Rafael Nadal and Novak Djokovic on clay ahead of the French Open. Former Wimbledon Marcos Baghdatis believes Djokovic and Nadal will be the main contenders for the rest of the Grand Slams this year – but insists they will face a strong test in teenage ace Alcaraz.

Alcaraz has already beaten both heavyweights this year and has shot up the rankings to sixth. The 19-year-old saw off Nadal and Djokovic on his way to sensationally winning the Madrid Open earlier this month.

Many are tipping Spaniard Alcaraz to be Nadal’s heir. He is yet to win a Grand Slam but could come close in 2022 if he is able to overcome his countryman and Djokovic.

Baghdatis – who will compete alongside Alcaraz at the Giorgio Armani Tennis Classic at The Hurlingham Club this June – believes the youngster will be the closest to challenge Nadal and Djokovic for Grand Slams this year – especially on clay at Roland-Garros.

The Cypriot was asked who the stars of Wimbledon 2022 will be. He said: “For sure, Carlos [Alcaraz]…[Novak] Djokovic and [Rafael] Nadal will be there until the end of this year too… It’s tough to say that [the other players] will defeat [Rafael] Nadal or [Novak] Djokovic, in five sets – it’s very difficult.

Alcaraz has aimed high by admitting he is ‘ready’ to win a major. The French Open is his next opportunity – Roland Garros will welcome stars from May 22.

“I’m not afraid to say that I’m ready to win a Grand Slam. Physically I feel very well. I am mentally strong. I am a strong player and in the end that is what it takes to win a Grand Slam,” the world no. 6, who has won on clay in Rio and Barcelona this year, said earlier this month.

“Now the level is accompanying me. I feel good and quite confident. It’s a host of things that can throw me up and I’m not afraid to say I’m ready to do it.”

Marcos Baghdatis will be at the Giorgio Armani Tennis Classic, playing in the ATP Champions Tour Legends Weekend on Saturday 25th & Sunday 26th June. Citi Taste of Tennis Tickets can be found here