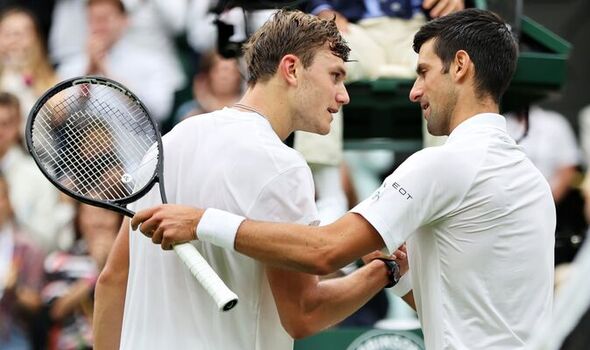 Jack Draper has admitted that his first-round match against Novak Djokovic at Wimbledon last year helped him become a “completely different player”. The world No 99 made his Grand Slam debut as a wildcard at the All England Club last year and took the first set off the eventual champion before losing in four.

Draper is playing his last tournament before his return to Wimbledon at the Eastbourne International. The 20-year-old has enjoyed great success since his debut against then-world No 1 Djokovic last year, winning four Challenger titles this season and cracking the top 100 for the first time on Monday.

Almost a year on from his baptism by fire in his Wimbledon opener against the 20-time Grand Slam champion, the Brit has admitted his match against the Serb has turned him into a new player after exposing holes in his game, despite his valiant effort to win the first set. “I think it’s a weird one because when I played Djokovic last year I felt like I was quite thrown in because I’d been injured so much,” he admitted ahead of debut at the Eastbourne International.

“I think at Queen’s again I’d hurt my ab or something so I didn’t serve until the morning I played Djokovic so it was a weird experience for me, that one. But I think when I played him [it] definitely exposed so many points in my game which helped me to improve again for this year, which the main goals were just staying injury free, get a good quality of practice and work on the things that I feel like the top players can expose.”

The British No 4 also thought things wouldn’t be the same if they managed to face off again at SW19, admitting he had become a whole new player following his clash with the eight-time Wimbledon champion 12 months ago. He said: “If I was to play him this year I would feel like I’m a completely different player, in a new place physically and my game identity I think is much more solid in my own head this year.

“So yeah, we’ll see who I play but I’ll be ready to take on anyone.” As well as having a 6-4 set against Djokovic already on his resume, Draper is in good company in the Next Gen Race to Milan, where he currently sits in fifth place behind the likes of current and former top 10 players Carlos Alcaraz and Jannik Sinner.

Both men are former champions at the Next Gen Finals, alongside former world No 3 Stefanos Tsitsipas, and Draper is in prime position to qualify for the year-end 21-and-under event for the first time in his career, with the top seven players getting a spot. While he was keeping an eye on his standing, the Brit admitted he was staying in the present and trying not to worry about qualifying yet.

“100 per cent I see the race and I see that I think I’m number four or five and I’m obviously in the mix with a lot of great players, and it’s obviously showing that all my hard work and the stuff I’m doing on a daily basis is putting me in a great position and being around good players like that,” he said. “I’m not too focused on that event for the end of the year just now, I’m working everyday to try and see if I can keep doing well each week, keep gaining momentum and hopefully I can get there but it’s a long season so let’s see where I am.”