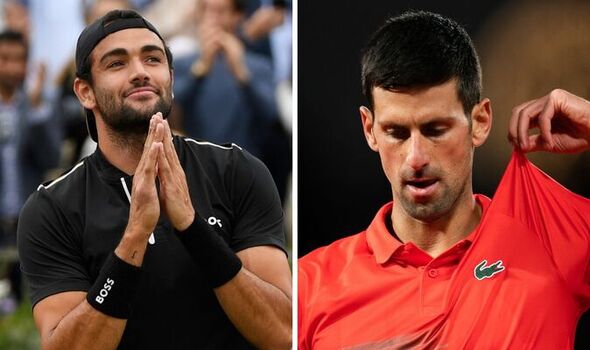 Matteo Berrettini will once again be a contender at Wimbledon this year having shown terrific form on grass and Greg Rusedski believes Novak Djokovic “will have watched” the Italian’s win at Queen’s on Sunday. Berrettini threatened to cause an upset at Wimbledon last year when he took the opening set in the final against Djokovic, only for the Serbian to take the next three and win his third consecutive SW19 title.

Djokovic hasn’t lost a match at Wimbledon since retiring from his quarter-final against Tomas Berdych in 2017. The Serbian has opted against playing in any warm-up events on grass heading into Wimbledon as he looks to clinch his 21st major title.

Depending on the draw, there could well be a repeat of last year’s final with Berrettini in excellent form since returning from injury. The 26-year-old made his comeback on the tour in Stuttgart last week, where he defeated Andy Murray in the final.

And Berrettini took that form into Queen’s this week, beating Filip Krajinovic in straight sets to defend his title from last year. All eyes will be on the Wimbledon draw next week and Rusedski believes Djokovic will have kept a close eye on Berrettini’s performance this past week.

“Djokovic will have watched this match,” Rusedski said on Amazon Prime. “And he will have looked at it and seen where Berrettini is at because when you’re off the tour, you’re looking at who is going to be your main threat at the championships and he’s made a statement these last two weeks.”

Tim Henman has tipped Berrettini as one of the favourites for Wimbledon this year and a “favourable draw” will give the Italian every chance of winning his first major. “We saw the draw at Roland Garros when it came out, it was very lopsided,” Henman said.

“I think if he gets a favourable draw then there’s no doubt he can be in another Wimbledon final.” Rusedski agreed, adding that players such as Nick Kyrgios will have a key role to play in the early rounds.

“That’s where the draw is going to be big,” he said. “There’s also the disruptor in Nick Kyrgios. He can’t win the title but he can beat, on his day, a Nadal or Djokovic in an early round match.

“Strange things happen at Wimbledon and if they have the draw like at Roland Garros and Berrettini is in the bottom half and they’re in the top, his smile will be even bigger than it is today.”