Novak Djokovic warns Alcaraz over new challenge after becoming No 1 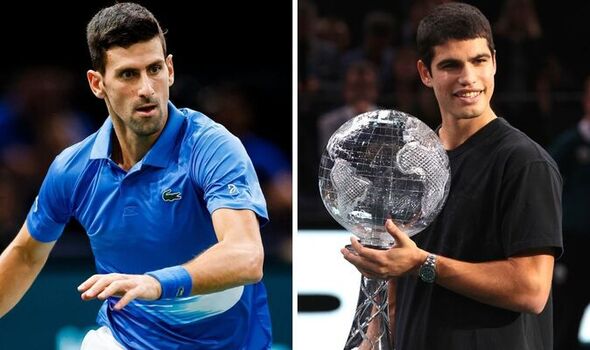 Novak Djokovic has warned Carlos Alcaraz that the biggest challenge of his career is yet to come after the 19-year-old became the youngest world No 1 in ATP history. Alcaraz was finally awarded his world No 1 trophy at this week’s Paris Masters after ascending to the top of the rankings when he won the US Open two months ago, but Djokovic says things are set to become more difficult.

Alcaraz made history as the first and only teenager to become the top-ranked man in men’s tennis when he picked up his maiden Grand Slam title at the US Open. Aged just 19, he was also the first teen to win a Major than compatriot Rafael Nadal 17 years ago and capped off what has been a breakout year after winning two Masters titles and two ATP 500s earlier in the season.

The Spaniard is now bidding to hold onto his ranking this week, as Nadal can overtake him by winning the title if the teenager also loses before the quarter-final. And Djokovic has now weighed in on Alcaraz’s race to become year-end No 1 as he warned that it would be even harder to try and retain his ranking points next season.

“He has had an amazing year. He deserves to be in that position for the results he has had,” he said of the six-time title winner’s bid to end the season as No 1. “In the end, results are the best yardstick for ranking. He has won a Grand Slam and has played consistently well. Although he is only 19 years old, he plays with a lot of maturity, with a lot of energy.”

Djokovic also thought Alcaraz had benefited from having a coach who had won a Grand Slam and reached No 1 in the world before, something that would come in handy when Alcaraz had to start defending his points to stay at the top. Touching on Juan Carlos Ferrero’s influence, he continued: “He also has a great coach, someone who has been in his shoes, former No 1 Ferrero. It is a perfect combination.

“Ferrero knows exactly what you are going through, how to help you mentally withstand the pressure of being number one and everyone wanting to dethrone you. This is just the beginning for him, but he is hungry for success.”

Continuing his warning for the world No 1, Djokovic said there would also be more pressure on Alcaraz after reaching the top of tennis in such a short timeframe. “Now he will have to defend points, something different,” the Serb added.

“When you are the one who is chasing, you have less pressure, when they are chasing you, when everyone wants to be where you are, things change mentally. We’ll see how it goes.”