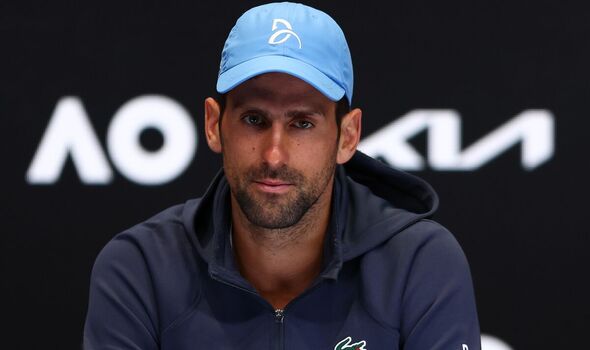 Novak Djokovic confirmed that everything was “okay” after cancelling his practice session at the Australian Open on Monday before taking to a practice court for an impromptu hit a few hours later. The world No 5 has been struggling with a hamstring injury since his run to the Adelaide title but reassured fans that he was fine after delaying his practice.

Djokovic is bidding to win a record 10th Australian Open title this fortnight, which will also see him tie long-time rival Rafael Nadal’s record of 22 overall Grand Slams. But his hopes have been somewhat thwarted since he tweaked his hamstring during his Adelaide semi-final nine days ago as the Serb has since been seen wearing tape on the muscle, abandoned a practice match earlier in the week and cancelled his scheduled practice session on Monday, raising alarm bells.

But he eased fears once again later on Monday as he did eventually take to a practice court a few hours later than planned, albeit with heavy strapping on his thigh. And the nine-time champion in Melbourne also made a short statement to fans watching on as he told them everything was fine while confirming his plans to take to the court for his first-round match against Roberto Carballes Baena on Tuesday.

“Thank you for coming, everything is okay, see you at the match,” Djokovic said at the end of his hour-long practice session, per Sasa Ozmo. It comes two days after the 21-time Major winner confessed that he was being more “cautious” in his practice sessions in a bid to preserve himself for the tournament.

“Well, I’ve been struggling with that a bit, to be honest, the last seven days. But it’s hopefully not the major concern. So far I’ve been able to train, compete and play points, practice sets. So that’s a positive sign,” he said during his pre-tournament press conference.

“Obviously, I’m being a bit more cautious. I’m not going full out on the training sessions, conserving the energy for next week. Hopefully it won’t cause an issue for me then.”

“Unfortunately, during the last week or so Nick has experienced some discomfort in his knee, routine MRI just to make sure everything was okay. There’s a parameniscal cyst growing in his left meniscus, which is the result of a small tear in his lateral meniscus,” Will Maher revealed, as Kyrgios shared his heartbreak to be missing his home tournament.