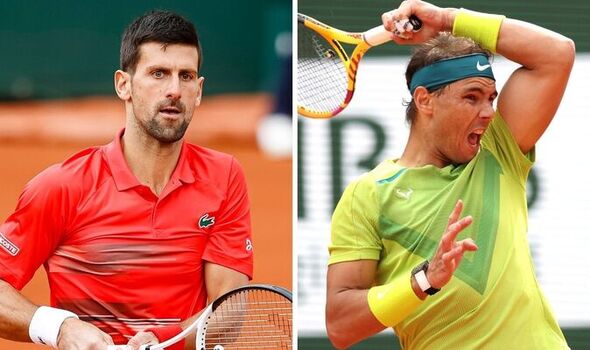 Novak Djokovic has admitted he “likes his chances” in his French Open quarter-final, which could be a rematch with Rafael Nadal almost a year after their semi-final clash in Paris. The world No 1 was also happy to have given himself an advantage ahead of what could be a meeting with his biggest rival, keeping himself fresh for the next round.

Djokovic and Nadal could face off for the 59th time in their careers in the French Open quarter final. The top seed is already through after a straight-set two-hour-and-15-minute victory over Diego Schwartzman, while the Spaniard is taking on Felix Auger-Aliassime for the chance to face the defending champion.

And the Serb was feeling confident ahead of what could be his first meeting with Nadal in a year, after he downed the 13-time champion in four sets in the 2021 semi-final. “It’s an anticipated match for a lot of people. I am glad because I didn’t spend too much time on the court, knowing that playing him at Roland Garros is always a very physical battle,” he admitted, already having the advantage of being the fresher opponent in the quarter-final with Nadal and Auger-Aliassime one-set all, meaning they will have to play at least four sets.

“I am ready, I like my chances whoever comes,” Djokovic added. The world No 1 also touched on the fact that he and his long-time rival will be requesting different sessions if they face off in Tuesday’s quarter-final, with the fifth seed preferring the day session conditions while Djokovic played better than Nadal at night.

“As top players we do have requests but they are not always accepted,” he explained. “At the end of the day that’s who decides, the tournament director and TV.” Djokovic’s words come after he admitted he and Nadal would be making contrasting requests during an appearance on French TV on Friday.

“All I will say is Rafa and I would make different requests,” he said, before Nadal shared his dislike for the French Open’s brand new night sessions after his own match on Friday, stating: “I don’t like night sessions on clay. I say the other day. I am very clear with that.”

While a potential Djokovic and Nadal quarter-final has been hyped up ever since the pair were drawn in the same quarter ahead of the tournament, the Serb is also ready to face Auger-Aliassime if the 21-year-old comes through his round-of-16 match against the Spaniard.

“He’s very disciplined about his everyday chores, hard worker, looks to improve all the time,” he said, assessing the Canadian’s game. “It seems by results that he is going in the right direction. Clay probably not his preferred surface but he has improved a lot.”