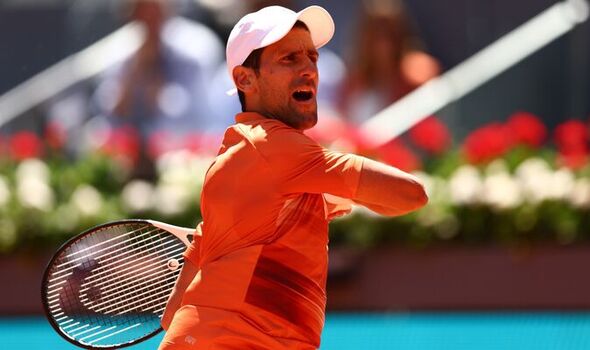 Novak Djokovic advanced to the last-four in Madrid with a routine 6-3 6-4 victory over 12th seed Hubert Hurkacz in just 81 minutes. The world No 1 will now face either Rafael Nadal or Carlos Alcaraz for a spot in his second final of the season.

Hurkacz was the lowest-ranked player remaining in the draw as the 12th seed, with all but one of the top eight seeds advancing to the quarter-finals. It was the first time in clay-court Masters 1000 history that the final eight was made up of players exclusively from the world’s top 15.

But facing the highest-ranked player, he was unable to break past the Djokovic wall in their fourth meeting, and second on a clay court. The world No 1 led their head-to-head 3-0 and showed exactly why he was undefeated against the Pole as he broke at the first opportunity, winning the first three games in quick succession.

On a hot day in Madrid, even the top seed appeared to be struggling with the heat between points while Hurkacz continued to look frustrated as he failed to get past the Serb. It was a routine opening set for Djokovic, who closed it out 6-3 after 34 minutes.

JUST IN: Medvedev injury update ahead of French Open poses threat to Djokovic

The 25-year-old was able to save a break point as he held to start the second set but lost his serve later on to go 2-3 down, putting the three-time former champion within three games of the victory. Djokovic continued to look unaffected by his lack of matches in Madrid – receiving a bye to the second-round where he defeated Gael Monfils before receiving a walkover into the quarter-final when Andy Murray was forced to withdraw with illness.

The world No 14 started to mount some pressure on his opponent’s serve at 3-4 down, going 15-30 up and taking Djokovic to deuce on his serve for the very first time in the match but the top seed managed to hold on and put himself one game away from the semi-final. Hurkacz was then forced to save two match points on his serve, forcing the top seed to close out the match himself.

Djokovic was able to close it out successfully on his own serve 6-3 6-4 to advance to his seventh Madrid Open semi-final. He now has a mouthwatering clash ahead of him no matter who comes through the second quarter-final later on Friday. The world No 1 takes on the winner of a match between Rafael Nadal and Carlos Alcaraz in Saturday’s semi-final.

It could be a 59th meeting between Djokovic and Nadal and the first in almost a year, after the Serb upet the 13-time French Open champion in the semi-finals of the Parisian Grand Slam tournament 11 months ago. It would also be their first showdown since Nadal broke the all-time men’s singles Grand Slam title record by winning a 21st Major in Australia at the start of the season.

Or it will be a first-ever meeting for Djokovic and Alcaraz, with the world No 1 yet to face the hottest young player who is fresh off the back of his fourth title win in Barcelona and his top 10 debut.