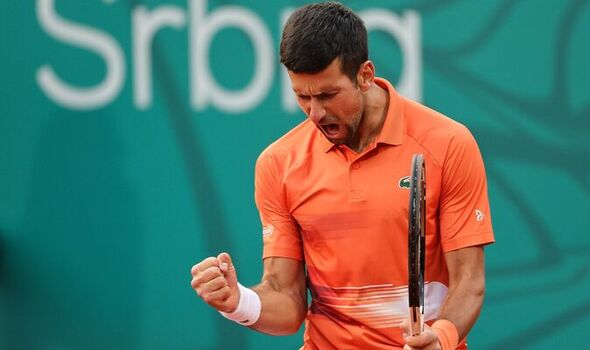 Novak Djokovic has admitted he enjoys the feeling of losing big matches after narrowly avoiding defeat in his two Serbia Open matches en-route to the semi-final. The world No 1 is playing just his third tournament of the year and is hoping to gain momentum ahead of his French Open title defence after recently suffering back-to-back losses for the first time since July.

Djokovic ended his losing streak in Belgrade when he came from a set and a break down to defeat countryman Laslo Djere in his opening round, and was forced to do the same against another Serb in Miomir Kecmanovic in their quarter-final clash. The wins came off the back of the world No 1’s first back-to-back losses since July last year, as he crashed out in the Dubai quarters in February before losing his opening match in Monte Carlo last week.

The Serb has barely been able to compete this year as a result of his unvaccinated status and admitted that he should “stop” his career but still enjoyed everything that came with playing tennis – including the tough defeats – too much. “I choose to play. No one is forcing me to play. I’ve done enough in my career that I could stop today. But I still feel motivated and inspired. I love to play in front of people,” he said of his career.

“I also, as weird as it sounds, I love being devastated by losing big matches. Because I know that means that I care about winning and being able to compete with the best players in the world.” The Serb has finally been able to build some momentum at the Serbia Open after avoiding defeat in his opening two matches but confessed he still wasn’t where he wanted to be with the French Open looming.

“The two victories are of great importance for my general feeling on the court, both in terms of the game and physically. It couldn’t have been better: playing three and a half hours yesterday and almost two and a half hours today with guys in good shape,” he said after his 4-6 6-3 6-3 win over Kecmanovic. “However, I’m still looking for my form, my game, it’s not yet what it should be.”

While Djokovic was happy to be improving with each match, he confessed that both Djere and Kecmanovic were better than him as he was “on the verge of defeat” as “they dictated the pace and dominated the court in most of the duels.”

The 20-time Major champion will take some comfort in the knowledge that he is finally returning to a regular schedule after his unvaccinated status kept him out of several tournaments at the start of the season, as he is set to play Madrid and Rome before the French Open. Now on a 4-2 win-loss record for the season, Djokovic shut down expectations that he should be a winning machine in spite of his dominance, adding:  “All these expectations from people, they got used to seeing you at that level for 10, 15 years. They always expect you to be winning 99 per cent of the matches.

“But obviously that’s not possible. You have to accept the fact that you’re going to lose, that you’re not going to feel good, that it might take more time to get into the groove.” Djokovic will be hoping he continues to get into the groove ahead of the French Open, where he is the defending champion, in what will be his first Grand Slam of the year after being forced to miss his chance to defend the Australian Open title in January.