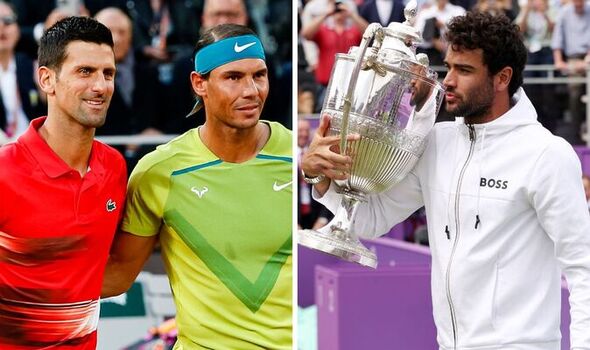 Cameron Norrie has claimed than “anyone” can “unsettle” Novak Djokovic and Rafael Nadal at Wimbledon, and likes Matteo Berrettini’s chances after the Italian won his second title in a row at Queen’s. The world No 11 is now unbeaten since returning from surgery two weeks ago and reached the final at the All England Club last year.

Norrie lost to Berrettini in last year’s Queen’s final, and the world No 11 managed to keep his unbeaten streak at the west London club alive as he successfully defended his title on Sunday. The Italian is now also undefeated since returning from hand surgery two weeks ago, as he won the trophy in Stuttgart the week before the cinch Championships.

And the British No 1 doesn’t see why the 26-year-old can’t keep his streak going into Wimbledon, where he could be one of the biggest threats to Djokovic and Nadal. “For me it’s impressive to come back after having surgery and just to go and win two titles back-to-back, a pretty sick effort,” Norrie said of the Italian.

Asked about his chances to disturb the top two seeds at Wimbledon next week, he continued: “Why not? He made the final of Wimby last year and he is coming in as one of the favourites again this year.”

Norrie also made an even bigger claim, believing that “anyone” would be able to upset the former world No 1s at SW19 this year as he added: “I think anyone has the chance to unsettle those boys at the moment.  But I think he’s looking good.”

Berrettini himself has downplayed claims that he is the favourite for Wimbledon ahead of Djokovic and Nadal. Speaking earlier last week at Queen’s, he said: “I think those two guys showed us so many times that they can win, and they actually won at tournaments, the Slams even though they weren’t in the best shape.

“Nadal won the Australian Open and Paris after he was injured, so yes I wouldn’t consider myself the favourite, but I like to think that I can win it. That’s the goal.” But another Brit also backed Berrettini to go all the way at Wimbledon, as Dan Evans said: “Yeah, I mean, the serve’s just a good serve, isn’t it? It doesn’t matter what surface it is. And the forehand, again, doesn’t matter what surface. And I think backhand’s hidden a bit with the grass helping his slice.

“I don’t see why not. I think last year would have probably helped him, his running in Wimbledon, the belief he has probably taken from that. I’d probably say he was quite tired last week and he did it pretty easily, as well. I think, come Wimbledon, he’ll be as good as he’s got, I think. He took a long time out and then won back-to-back. I think especially getting seeded eight now is a thing, as well. I think he’s definitely one of the favourites.”