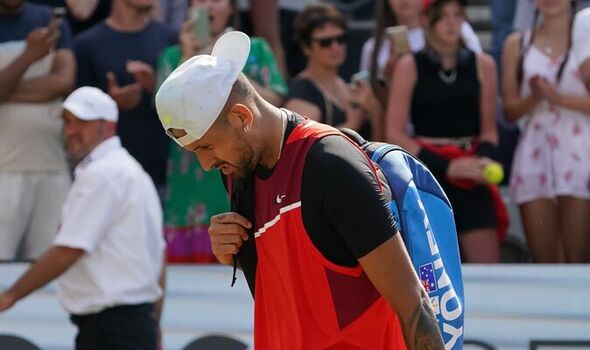 Nick Kyrgios has claimed he was on the end of ‘racial slurs’ that contributed to his furious meltdown against Andy Murray in the Stuttgart Open semi-finals on Saturday. He imploded at the end of the first set and the start of the second as Murray secured a 7-6 6-2 triumph in 91 minutes.

After a closely-fought first set, in which Kyrgios was on fine form, Murray clinched the tiebreak 7-5, prompting the 27-year-old Aussie to smash his racket on the court and his bench. He received a point penalty for his actions, followed by a game penalty for unsportsmanlike conduct just moments later.

The incidents derailed Kyrgios from his game, and he collapsed in the second set as Murray booked a place against Matteo Berrettini in Sunday’s final. And after the match, he took to Instagram to reveal he was the victim of ‘racial slurs’ from the crowd.

He wrote: “When is this going to stop? Dealing with racial slurs from the crowd? I UNDERSTAND THAT MY BEHAVIOUR ISN’T THE BEST ALL THE TIME – but ‘you little BLACK SHEEP’, ‘shut up and play’… little comments like this are NOT ACCEPTABLE. When I retaliate to the crowd, I get penalised. This is messed up.”

Kyrgios has previously revealed racist abuse and hateful behaviour drove him to a dark place in the early stages of his career, impacting his mental health. “I feel like I’m just resilient,” Kyrgios explained in August 2021. “If someone is not as resilient as me mentally, the amount of hate I got, the amount of racism I got, the amount of bulls**t that I got from the tour, from fans, from everything, I could have been…

“I was dealing with, like, not even close to the amount of stuff that was going on. That’s what I think. Instead of outcasting and almost crucifying a personality, you say, ‘Okay, this guy is different, let’s act a certain way, let’s not treat him like a Roger Federer or like a Marin Cilic. He’s his own person’.

“I’m just saying this sport could have driven me into a place of dark, which it did for a bit, how mentally tough it was for 18, being one of the most well-known players in Australia, getting absolutely hammered by the media. It’s not so easy.”