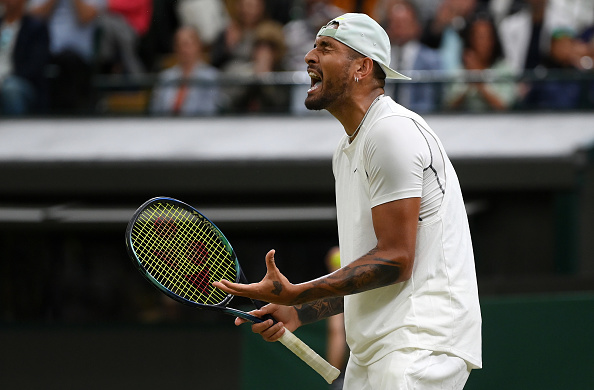 Nick Kyrgios defeated Stefanos Tsitsipas in a controversial four-set thriller to reach the fourth round of Wimbledon.

The Australian lost the first set 6-7 (2-6), but he relentlessly complained to the umpire after a mistake from the linesman cost him a crucial point.

He could be heard saying: ‘Why don’t you just get a new ref? He’s got one line to call. Every single match there’s just mistakes and we just have to deal with it?’

Kyrgios was given a warning for repeated bad language but moments later Tsitsipas was also warned for hitting a ball into the crowd in frustration which his opponent believed should have resulted in a default.

‘You’re a disgrace, you just change the rules whenever you want? Bring the supervisor out,’ he added before the referee was called out to try and calm down the player, to little avail.

Tsitsipas was eventually given a point penalty for similar incident but the Greek was incensed and could be heard saying: ‘We are here to play tennis and he [Kygrios] has zero respect.’

After the game, Kyrgios did seem more content, telling the raucous crowd: ‘Honestly, it was a hell of an atmosphere, an amazing match. I felt like the favourite coming in, I beat him [Tsitsipas] a couple of weeks ago.

‘He’s a hell of a player, he knows how to beat me, he’s beaten me once. I’m so happy to be through. He was getting frustrated at times and it is a frustrating sport.

‘I have ultimate respect for him, whatever happens on the court I love him and I’m close with his brother. It’s amazing, everywhere I go I seem to have full stadiums. The media loves to say I’m bad for the sport but clearly I’m not.

‘I’m going to rest, recover and do everything right and hopefully I can keep going.’