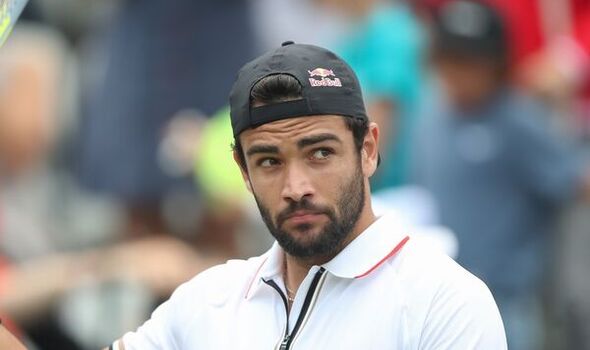 Stuttgart Open champion Matteo Berrettini sent a classy message to Andy Murray after he defeated the Brit 6-4, 5-7, 6-3 in Sunday’s final. The Italian was just too strong for the Scot, with Murray appearing to suffer with a hip injury during the third and final set.

Speaking after their encounter, Berrettini was dignified in victory, and was clearly emotional as he told reporters: “It was really tough to digest (the feeling of winning). I felt the momentum in that part of the match and then Andy was able to serve well and took the chances that I didn’t take. We went to the third set and I settled myself and said, ‘OK I just have to fight.’

“Congrats to Andy for the great tournament. This is not the way we wanted to finish the match. Of course he’s hurt, you can see it. I’m sorry for him.

“But he showed us so many times how to come back. I think I even learned a little bit for him, what he achieved in his career. For me it’s an honour to play against him in this kind of court.”

When pressed on his emotions, Berrettini added: “I don’t know, it’s too soon. It feels unbelievable. It was the last thing I imagined when I came here. Of course it was a goal but coming back from an injury like that, the first surgery of my life then winning the tournament…

“And not even playing my best tennis in the first round, it feels very special. Three years ago I played one of the best weeks of my life. I think I started so-so and then I started to play better and better. It feels great though.”

All attentions will now turn towards Queens and Wimbledon, but Murray fans may be concerned after he required medical attention twice in Stuttgart’s final.

Murray first needed to call for medical attention while 4-6, 7-5, 1-0 down. He was broken to love in the first game of set three and then called the physio on to the court for several minutes of massaging. The 35-year-old Glaswegian eventually returned to his feet to play on through the problem but was evidently moving with some difficulty.

And he required further assistance mid-game, at 4-6, 7-5, 4-2, as the physio took another look at his hip/groin area. The Scot had another brief massage but once more continued to play through the pain and was able to win the game to protect his serve.

While struggling on serve, Murray told his box: “From the back it’s fine but there’s no chance I can serve properly. That’s what happens when you have those big breaks.” And despite a phenomenal effort, making Berrettini work hard for his victory, Murray eventually fell to defeat.