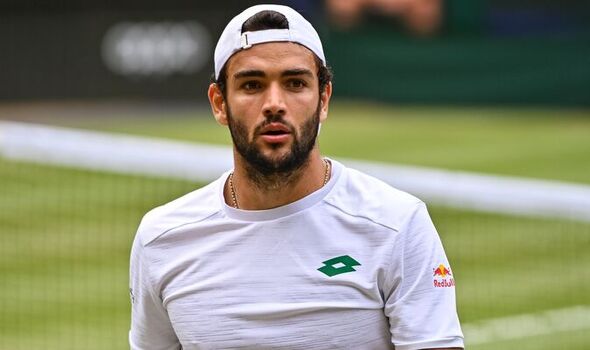 Matteo Berrettini has claimed that Wimbledon’s popularity among players won’t be affected by the ATP Tour’s decision to remove all ranking points on offer. The Italian is one of the players who will be hit hardest by the move as last year’s runner-up, losing 1,200 of his points tally.

Berrettini hit out at the ATP on Monday over their decision to remove all ranking points on offer at Wimbledon and strip players of the points they earned in 2021. The world No 10 is returning from right hand surgery and has already won his first tournament back in Stuttgart but will see his ranking take a tumble when his 1,200 runner-up points from last year’s Wimbledon come off.

Despite the tour’s move to sanction Wimbledon in response to the tournament’s ban on Russian and Belarusian players, the Italian was still adamant that “everyone would play” the tournament even without points on offer. “I think everybody is going to go and play Wimbledon regardless, points or no points,” he said, speaking ahead of his title defence at the cinch Championships.

“It’s a Slam, if I read it right it’s going to be a record for prize money this year as well so everybody is going to play obviously and just also because it’s Wimbledon, because it’s one of the most important tournaments that we have and I don’t see anybody saying, ‘okay we’re not going because there’s no points.’”

Berrettini also admitted the removal of ranking points would affect lower-ranked players who could receive a boost from a strong performance as well as those with a large chunk of their points being removed, recalling how he benefited from a similar uplift at the US Open in 2019. He continued: “I think it’s affecting more obviously the ones what have to defend a lot [of points] and the ones that can gain a lot of points.

“For example, for me reaching the semi-finals of the US Open changed my career because then I qualified for the ATP Finals when it was back in London. One situation changed everything so I think it’s also not really fair for those players.”

Last year’s runner-up also confirmed that, to his knowledge, the ATP would not be changing their decision to remove all ranking points. “But again, it’s a really tough situation,” he added. “I know [in] my experience I didn’t hear any player I talked to said ‘okay, this is what we should have done’ but for sure I didn’t talk to all the players.

“But I don’t think there’s going to be any change to the tournament, I think everybody is gonna play with their best effort and it’s going to be a great Wimbledon.”