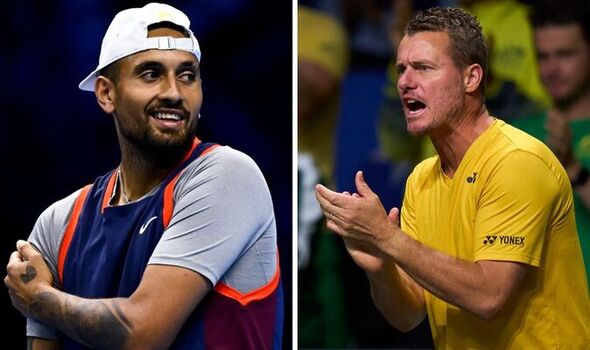 Lleyton Hewitt has responded to Nick Kyrgios’ Davis Cup Finals prediction for the Australian squad after opting not to play. The world No 22 ended his season at last week’s ATP Finals after playing the doubles with compatriot Thanasi Kokkinakis but did not join his partner in Malaga for the Davis Cup, though he thought the team was strong enough to do well in his absence.

Kyrgios enjoyed the best season of his career this year in both singles and doubles, winning the Australian Open doubles at the start of the year with Kokkinakis as well as two more tournaments in Atlanta and Washington while he reached his maiden Grand Slam singles final at Wimbledon and picked up a seventh career title in Washington.

But he did not join the Australian Davis Cup team in Malaga for this week’s finals as he managed his schedule to ensure he wasn’t away from home for long periods of time, though he voiced his belief in the squad during his time at the ATP Finals in Turin and left the team captain surprised with his admission.

After the team booked their spot in the semi-final thanks to victories from Jordan Thompson and Alex de Minaur in the quarter-finals against the Netherlands, Hewitt was told that Kyrgios remained confident in his decision not to play thanks to his belief in the other players. “He said the two of you had had quite a few conversations, and then he decided that this is a team that could go all the way even without him,” Australia’s Davis Cup captain was told.

JUST IN: Nadal hints at reasons protege Alcaraz will surpass his greatness

“Who decided that?” Hewitt responded, before being left surprised when he was told it was Kyrgios who backed his compatriots to win the World Cup of men’s tennis. Laughing, he added: “Well, obviously we would have loved to have Nick play. You know, he’s had an incredible year and not played that many tournaments, to be honest. Yeah, we all know the capability of how he can play high-level tennis when he’s motivated.”

The former world No 1 also shared his pride in his team after they managed to make the last four without their top-ranked player. “For us not to have him here, we put that aside and we try and come together, and we’ve got a good group of guys here that are willing to do the hard yards and put their hand up for their country, and I couldn’t be prouder of all of them,” he continued.

It came after Hewitt opted for Thompson to play the opening match against Thanasi Kokkinakis, with a good selection of players making it tough to choose who would compete. “You know, Jason Kubler is another one,” the squad captain admitted, as the world No 109 was also an option for the first match.

“He just narrowly missed out on a spot to Thommo, and I would have had as much faith in Kubes going out there and playing tonight as I did Thommo. The reason for Thommo, yeah, it’s always hard making these decisions. Sometimes it pays off; sometimes it doesn’t. You know, Thommo put in a lot of work last week. I felt like he was going to outlast — he was going to go all night tonight, and in the end, it went that way.”

And addressing his choice not to pick Kokkinakis, who came straight from his doubles appearance in Turin with Kyrgios, he added: “Yeah, Thanasi, I could have easily played him as well. Tough decisions, but yeah, some you get right, some you don’t, and tonight it fell our way.”