Kyrgios declares he’s the best grasscourt player in the world

New Sydney resident Nick Kyrgios has made the bold claim that he is the world’s best grasscourt player as he eyes a tilt at the Wimbledon crown in June and July.

Australia’s most polarising tennis star will sit out the French Open, which begins later this month, but has Wimbledon firmly in his sights – a tournament where he made the last eight as a 19-year-old in 2014. 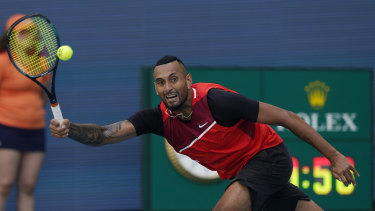 Nick Kyrgios at the Miami Open.Credit:AP

Kyrgios pushed world No.2 Daniil Medvedev in the second round of the Australian Open before claiming a breakthrough doubles title with Thanasi Kokkinakis.

Speaking at an NBA event in Sydney, to promote the upcoming play-offs, Kyrgios told the Herald he feels at the top of his game.

Asked who he felt was the best player in the world heading into Wimbledon later this year, Kyrgios, ranked 78th in the world, said: “I mean, on the grass, I’d say me.”

Kyrgios hasn’t made it past the third round of Wimbledon since 2016 in four attempts. His quarter-final effort in 2014 was his best result outside two fourth-round losses in 2015 and 2016.

In an interview with Karl Stefanovic last month, the 27-year-old said the remainder of 2022 would be “very crucial for my career”.

Kyrgios says his main focus is Wimbledon, which begins on June 27, but admits this year has a different feel.

“Something about this year has just been different,” Kyrgios said. “I’ve played five or six events and I’ve gone pretty well in pretty much every one I’ve played and I’ve beaten a lot of the top players in the world this year.

“I guess it’s more of a resurgence year, just going out there and showing people that I don’t have to go out there and play all the time, [that] I can still be at the top of the game. I’m just enjoying it and doing it my way.

“I play for a lot of people. I feel like I’m very relatable. A lot of kids and people look up to me when I play. If someone like me can make it this far and achieve what I’ve achieved, I think it gives them a lot of hope.

“Obviously, I’m 27 now, so I’ve got to provide a bit of money, but it’s just a lot of fun; the tennis tour, travelling around the world, it’s a pretty nice lifestyle. I want to soak it up while I can.”

Kyrgios, a proud Canberran, has also done something he never thought he would do: move to Sydney.

When he’s not travelling the world, Kyrgios will now be living in Kensington with his partner, Costeen Hatzi.

“The reason [for the move] was because of my girlfriend,” Kyrgios said. “I live in Canberra and I met her and basically moved my whole life up to Sydney. I love it here. I never thought I’d move here. Just super excited to see what comes from Sydney.”

Kyrgios with partner Costeen Hatzi at an NBA event in Sydney on Wednesday.Credit:Getty

Aside from singles aspirations, Kyrgios will continue to play doubles with Kokkinakis after their success at the Australian Open, which captivated the nation in the second week of the tournament.

“I was almost waiting for something like that to happen,” Kyrgios said. “I was super pleased for Thanasi. I feel like that put him back on the map and, hopefully, he can keep kicking on after that.”

Kyrgios spent Wednesday on Australia’s first floating basketball court in Sydney Harbour, as part of an NBA event, before boarding a VIP boat in the afternoon with a number of celebrities.

“You know how big a basketball fan I am,” Kyrgios said. “I saw the first floating basketball court in Australia, so it’s pretty exciting stuff. It just brings everyone together for a good time.”