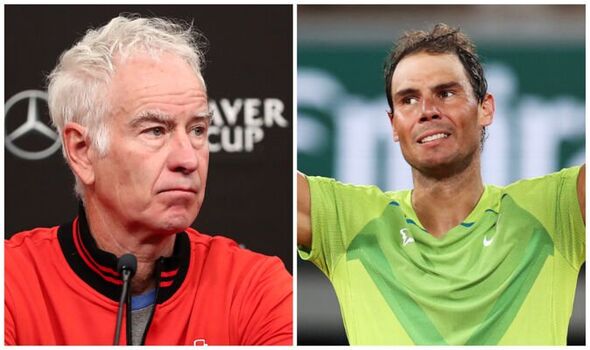 John McEnroe slammed Rafael Nadal for his tactics during his French Open quarter-final 6-2, 4-6, 6-2, 7-6 victory over Novak Djokovic. The Spaniard, who has previously been punished for ignoring the 25-second countdown while serving, was sloppy once again as the contest lasted more than four hours.

Nadal did receive a time violation in the second set, but McEnroe was enraged live on air during the epic clash between the two titans of the sport. He said on the Eurosport commentary: “He should be penalised. If you are going to do it, do it, otherwise don’t bother. It is like humouring everyone.

“Or don’t bother. It’s like, you can take as much time as you want on the second serve. How long is this game? 12 minutes? Jeez.”

The classic in Paris lasted four hours and 12 minutes, finishing at 1.15am as Nadal was in agreement with Djokovic who claimed that the scheduling is forcing players to play too late. The Serbian said: “I think they are starting too late. But TV decides, that’s the world we live in.”

Nadal agreed with Djokovic and had asked on Monday not to play in the night session. “It is too late, without a doubt,” said the 35-year-old. “I can’t complain because we have two days off now but if you only have one day off, or like [Alexander] Zverev had in Madrid when he had to play the final the next day, then it’s a big issue.”

Djokovic was booed by fans after an incident in the fourth set which saw the Serbian smack the net with his racket in rage after his shot dropped short after clipping the net. McEnroe was not happy with fans that jeered at Djokovic however and said: “I mean, cut the guy some slack!

“I mean, come on! He’s out there battling, he hit the ball, he thinks it’s going to be a winner… it clips the tape, and then that’s harsh. That’s all I can say. They should be happy he cares that much.

“No other player has had to deal with more adversity [than Novak]. It is unfair, I’ve got to say that. This guy has turned lemons into lemonade more often than any player in the history of tennis, and if you don’t think it bothers him, you’re nuts. He is so mentally tough that he can deal with this and somehow channel that anger and frustration over what he feels is a lack of respect, and I feel it is too.”