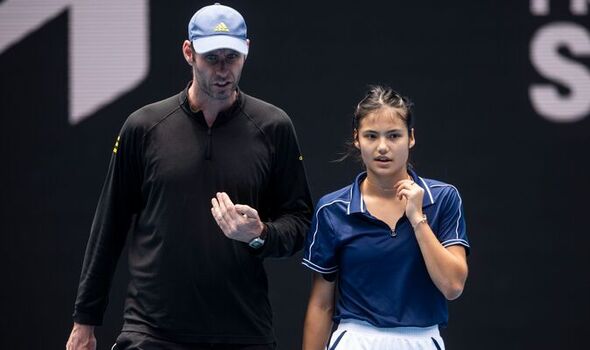 Emma Raducanu has ended a coaching partnership for the third time in nine months after parting ways with Torben Beltz. The world No 11 previously stopped working with Nigel Sears after her run to the second week of Wimbledon as a wildcard and did not continue her partnership with Andrew Richardson after winning the US Open as the 150th-ranked qualifier.

Raducanu has split with her coach of five months, Torben Beltz. The world No 11 announced she was no longer with Beltz on Tuesday, just a week after he travelled with her to Stuttgart, where she made her first quarter-final of the year, saying: “I want to thank Torben for his coaching, professionalism and dedication over the last half a year.

“He has a huge heart and I have enjoyed our strong chemistry during the time together. I feel the best direction for my development is to transition to a new training model with the LTA supporting in the interim.” It is the third time Raducanu has split with one of her coaches in less than a year, and the third time it has come after a successful result for the 19-year-old.

Raducanu started working with Nigel Sears – Andy Murray’s father-in-law and renowned WTA coach – last April as she neared the end of Sixth Form and her A-Levels, and made her debut on the professional tour under Sears. After losing in the first round of Nottingham, the teenager made Grand Slam debut as the 338th-ranked wildcard at Wimbledon, getting all the way to the second week before retiring her round-of-16 match.

Despite becoming the youngest British woman to reach that stage in the Open Era and breaking into the world’s top 200, Raducanu ended her partnership with Sears in favour of working with one of her youth coaches Andrew Richardson, with Raducanu and her father said to be after a familiar face to travel with the teenager for her first pro tournaments abroad, seeing him as a good option to trial while she was ranked around No 200.

And their partnership more than exceeded expectations as Raducanu went on to become the first qualifier in history to win a Grand Slam title, failing to drop a set across ten matches in qualifying and the main draw to become the US Open champion, which also skyrocketed her into the world’s top 25. But less than two weeks after her historic triumph in Flushing Meadows, Raducanu had given her coach the axe one again, opting not to extend her trial with Richardson.

“Where I was at after Wimbledon, I was ranked around 200 in the world and at the time I thought Andrew would be a great coach to trial so we went to the States but never did I even dream of winning the US Open and having the run I did and now I’m ranked 22 in the world, which is pretty crazy to me,” she said at the time, explaining the shock decision.

“I feel like at this stage in my career, and playing the top players in the world, I realised I really need someone right now that has had that WTA Tour experience at the high levels, which means that I’m looking for someone who has been at that level and knows what it takes.”

Her answer was Beltz – the man who guided Angie Kerber to world No 1 and two of her three Grand Slam titles. Raducanu announced their partnership over the off-season, selecting the German as the experienced WTA coach to guide her in her first full season as a pro, but that partnership has now come to an end with just a week to go until the Madrid WTA 1000 and less than a month before the world No 11 makes her French Open debut.

It comes off the back of Raducanu’s best result of the year, as she reached the quarter-final in Stuttgart before falling to world No 1 and eventual champion Iga Swiatek. She has no intention to appoint a head coach in the short-term after planning to “transition to a new training model”, and could instead be guided by different coaches for different events in a move similar to her work with Sears and Richardson for two different Grand Slams last year. In the meantime, Raducanu will be joined by the LTA’s Iain Bates in Madrid next week.