Rafael Nadal’s Australian Open defence will rest in part on his ability to adapt to “dead” tennis balls that are blunting the bounce he usually gets on his heavily top-spinning groundstrokes.

The Spaniard has befuddled rivals for years with the dizzying topspin he imparts on his forehand, but that weapon has been stymied by this year’s tennis balls.

“They say [it] is the same, but the ball is worse quality, without a doubt,” Nadal said. 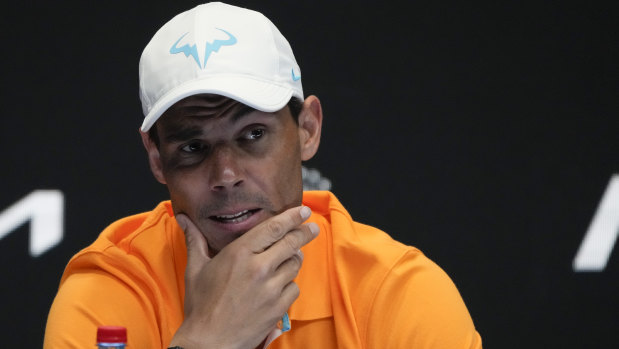 Spain’s Rafael Nadal during his press conference on Saturday.Credit:AP Photo

“I think it’s a ball that doesn’t get the same spin as usual. After a couple of hits, the ball loses the pressure. It’s more difficult to hit with the right spin.

“I think it is easier to play when you play flatter on the shots. But I need to live with it. I think I have practised enough with the ball to be ready for it.”

Stan Wawrinka, who defeated Nadal to win the 2014 Australian Open, said the assessment of the 22-time grand slam champion was correct, but said players would adapt to the change.

“The balls are a bit different this year, it is true,” he said.

“I have already tested them (from December) and it is true there is a big difference after you have used them for a few games than when they are new. They lose a lot of pop and … it is completely different.”

Australian veteran John Millman, who plays Switzerland’s Marc-Andrea Huesler in the opening round on Monday, identified a change in the way the balls were playing last month.

The wildcard entrant predicted they would suit players including American Taylor Fritz, who was part of the United States team that won the United Cup, and Nick Kyrgios.

“Having hit with the AO 2023 Dunlop balls last week, my general observation is they are light and quick, especially when new,” he posted on social media.

“Not the easiest to control initially even in the humid conditions where I am in Brisbane. NK (Kyrgios), (Hubert) Hurkacz, Fritz all very dangerous this AO.”

The players are presented with six tennis balls that are used during the warm-up and first seven games of the match. Another six new balls are issued every nine games thereafter.

“(When they introduce) the new balls, it feels like a completely different match,” he said.

“When they get a little bit heavier, those are the games where you really have to battle to win.”

Nadal, who begins his Australian Open defence against England’s Jack Draper on Monday, is confident he will adjust to the conditions and find his best form.

The 36-year-old has lost five of his last six singles matches, including defeats to Cameron Norrie and de Minaur in the United Cup in Sydney.

But the 2009 and 2022 Australian Open champion said recent practice sessions had boosted his belief.

“I feel faster in the legs. I feel (I’m) playing better with more confidence. The last three weeks of preparation here have been very positive from my point of view,” he said.

Watch the Australian Open live and free on the Nine Network – Channel 9, 9Gem, and 9NOW.