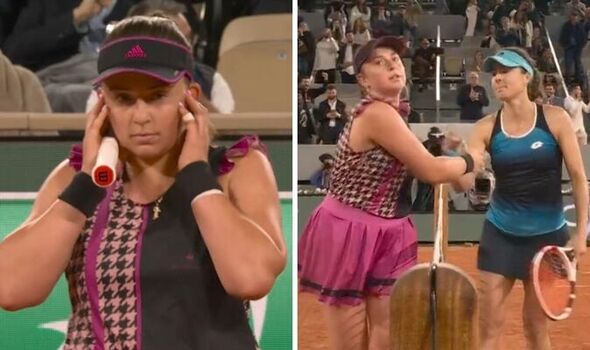 Jelena Ostapenko had a salty reaction to her rollercoaster three-set loss in her first French Open night session match on Thursday. The 2017 champion suffered defeat to home hope Alize Cornet and covered her ears to shut out the cheers of the French fans before storming off following a frosty handshake with her conqueror.

Ostapenko surprised the tennis world by becoming the first unseeded woman to win the French Open since 1933 when she lifted the title days after her 20th birthday in 2017. It was her first WTA Tour title and remains her only Grand Slam trophy but the world No 13 had started strong this year by dropping just five games in her opening round.

Her second-round against French world No 40 Cornet was the first women’s match to be given the coveted new Court Philippe-Chatrier night session match but things started badly for the former champion as she was bagelled by the 32-year-old in 22 minutes. The Latvian responded by taking the second 6-1 in an up-and-down match but ultimately lost 6-0 1-6 6-3 in an hour and 41 minutes.

As the Parisian crowd cheered for the home player, the 24-year-old covered her ears to drown them out before giving her opponent a salty handshake, refusing to look Corner in the eye as she was already storming off while shaking her hand. Despite Ostapenko’s bitter reaction, the Frenchwoman shared her sympathy for the former world No 5.

JUST IN: Wimbledon scrubs Miss and Mrs from honours boards in equality drive

Asked about Ostapenko’s reaction at the end of the match and what it was like to play in the noisy night session atmosphere, Cornet said: “Yes, it’s impressive, you’re on the edge of the court, you have to hear. When we tell ourselves that all these people are there for us, it still does something. I had chills. In addition, there was the “ola”, I almost had tears in my eyes.

“It’s noisy, this stage, when people start getting into it. It’s like an arena. For Jelena, poor thing, it couldn’t have been easy. But you have to have this advantage a bit when you’re French, the public is there for that, to encourage us to go as far as possible.”

And the Nice-born player even admitted the French crowd was a tricky one to face but hit back at the idea that they were disrespectful as she continued: “The French public is pretty tough overall, it’s better to have them with us than against us. We boo easily. It’s easy to put players in misery, and when you’re not on your side, it can be very hard.

“But disrespectful, I don’t find, because every time there is a player who plays in his country, it’s like that, he has the support. In any case, me, tonight, it didn’t put any pressure on me at all, on the contrary, it really gave me extra energy, and that was exactly what I needed.”