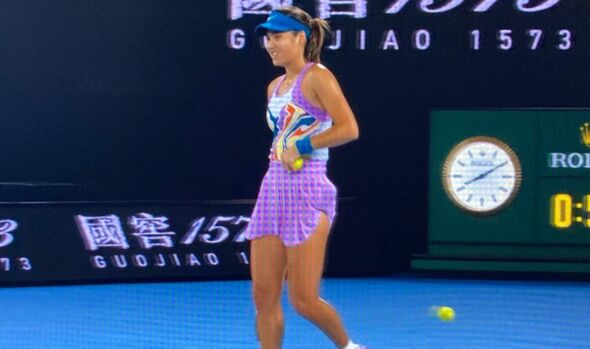 Emma Raducanu appears to be the latest player at the Australian Open to have picked up an injury during her match against Coco Gauff. Eurosport commentator Jo Durie noticed in the early stages of the second set that Raducanu was clutching at her stomach in discomfort.

“I don’t know if Raducanu’s got something going on in her stomach,” she said on Eurosport. “She keeps prodding her stomach and there’s a couple times she’s been wincing.

“The power has kind of gone out of the serve at the moment.” It became more clear in the second set that Raducanu was clearly suffering some sort of issue.

The Brit’s first serve speed had dropped from her usual 180km/h to just 150km/h. She continued to battle through the pain, but was clearly in some displeasure with Gauff showing no mercy.

The No 7 seed immediately held her break of serve with a love-service game to take a commanding 3-1 lead in the second set. Raducanu was able to hold serve on the very next game, but the 2021 US Open champion was unable to make anything work on Gauff’s serve.

The match had been talked up as a highlight of the second round at the Australian Open. Both players are seen as future superstars in the women’s game with Raducanu already clinching a Grand Slam to her name.

But neither of them got off to a fast start to their contest with three consecutive breaks of serve. Gauff ended up taking control, largely due to Raducanu’s number of unforced errors.

However, if Raducanu is suffering from an abdomen issue then it’s the latest in a long line of injury troubles for the 20-year-old. Ever since breaking out onto the WTA Tour, Raducanu has struggled with fitness issues that have caused her ranking position to drop.

But it’s also the latest injury situation at the Australian Open already this tournament. Rafael Nadal suffered a reoccurence of his troublesome hip in his defeat to MacKenzie McDonald earlier in the day.

Novak Djokovic has also been battling a thigh issue, although he showed no signs of it causing him problems in his first-round win. Nick Kyrgios, Carlos Alcaraz and local hope Ajla Tomljanovic had already withdrawn from the major before the tournament got underway.