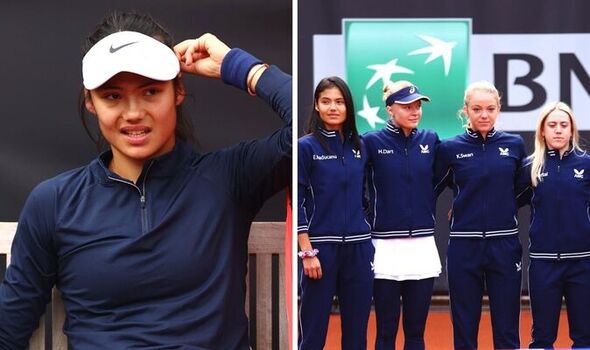 Great Britain’s Billie Jean King Cup squad fell at the final hurdle on Saturday and lost their qualifier tie to the Czech Republic in the decisive doubles match. It was Emma Raducanu’s BJK Cup debut and the 19-year-old led the squad as the No 1 player but found herself injured on Saturday before Harriet Dart forced the doubles match, ultimately falling alongside Katie Swan.

It is the second consecutive year that the British BJK Cup squad has failed to win their qualifier tie and reach the BJK Cup Finals. It means Great Britain will not be in with a chance to win the ‘world cup of women’s tennis’ in 2022 and instead will go into a play-off in the same week as the finals for the chance to return to the qualifier stage next year, or risk being relegated further into the Group I stage.

Raducanu was the lead player of the squad this weekend, winning her first-ever professional match on a clay court and her debut BJK Cup match on Friday 7-5 7-5 over the Czech Republic’s Tereza Martincova, keeping her country alive after Dart suffered a 6-1 6-0 loss to the Czech team’s top player Marketa Vondrousova. But things went south for the US Open champion on Saturday when she suffered blistering on her right foot during her 6-1 6-1 defeat to Vondrousova, admitting she felt “helpless” on court.

It was then Dart’s turn to keep Britain in the tie when she defeated Linda Fruhvirtova 6-0 5-7 6-2 to take the qualifier down to the wire in the decisive doubles match, where she partnered Katie Swan to take on Vondrousova and Karolina Muchova with Raducanu injured and unable to compete again.

The Czech duo showed why they were the favourites in the doubles as they took the opening set 6-1, though they needed 40 minutes after a number of lengthy games that went to multiple deuces. Dart and Swan managed to give themselves a boost by opening the second set with a break but were immediately broken back by the world Nos 32 and 66.

It was a fourth-consecutive game for Vondrousova and Muchova as they fended off two break points from the Brits but Dart and Swan went on their own run of games as they got things back level at 4-4. But it wasn’t to be for Great Britain in the 2022 Billie Jean King Cup as Vondrousova and Muchova broke one final time to win the doubles match 6-1 7-5 and clinch the tie for Czech Republic, allowing them to progress to the BJK Cup Finals later this year.

Last year, Britain faced Slovakia at the same stage in the qualifiers where they suffered a more one-sided 3-1 loss, failing to even make it to the decisive doubles match. It put them into the 2021 playoffs where they defeated Mexico at home in London 3-1 to find themselves back in the qualifier this year against the Czech Republic.

And the British squad will be hoping to repeat last year’s pattern, getting through the playoffs to find themselves back in the qualifiers once more in 2023 where they can hopefully make it third time lucky and finally qualify for BJK Cup Finals week as one of the top 12 teams fighting for the title.

But all hope isn’t lost just yet as Britain is bidding to become a host country for the Finals to capitalise on the piqued interest in tennis, especially women’s tennis following Raducanu’s historic US Open win last September. If the LTA is successful in their bid, the British squad will receive a wildcard to the finals.