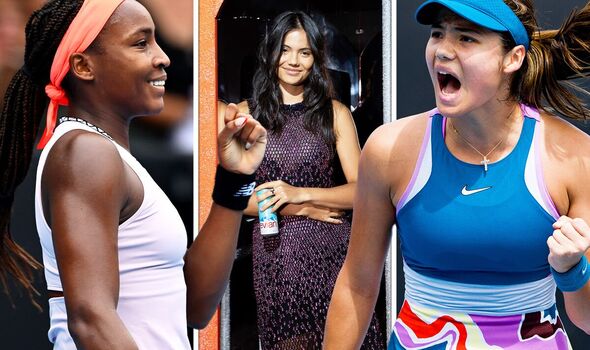 Emma Raducanu has hailed Coco Gauff as a “great role model” for how she plays the fame game before the two young superstars collide at the Australian Open. The British No.1 and the American teenager first practised together before the U12s Orange Bowl in Florida a decade ago.

And Raducanu lost in the first round of qualifying at Wimbledon in 2019 when 15-year-old Gauff made her name by beating Venus Williams. “I was then playing Junior Wimbledon on Ct 5 and she was on Centre Court!” the Kent star laughed.

The two will now meet for the first time – and perhaps start a great rivalry – with Raducanu a former US Open winner and Gauff now up to world No.7 after reaching last year’s French Open final. During her rise to the top of the sport, the American has also used her voice to speak up on political issues like Black Lives Matter and gun control. And Raducanu said: “I think she’s a great person on and off the court. She’s extremely humble and down to earth. And what she’s achieved on the court has obviously helped in giving her this platform for her to pursue what she pleases off the court as well. She’s a great role model to so many. I’m really looking forward to this match. I’m very up for it.”

Asked to name her passion, the Kent star added: “For me, I absolutely love getting on court with younger kids and helping out.” But while Gauff had a slower rise up the rankings – and Raducanu will seek to beat a top ten player for the first time on Wednesday – the Bromley-based star shot into the top 10 after her New York triumph. She has now fallen back to world No.77 while juggling her time with her various sponsors.

“I think I’m still learning the balance,” she said. “I give 200% in everything I do. So even when I’m doing my commitments, I’m giving my all and that can sometimes drain energy without even realising. So I’ve just been working on scheduling the commitments better around the training.” Gauff, now 18, reckoned Raducanu is under more of a spotlight because she has developed in Serena Williams’ shadow while Raducanu, 20, is the only famous British female player.

“Obviously she’s gone through a lot of pressure, bursting onto the scene,” said the title winner in Auckland last week. “And especially I feel like being from the UK, being like the first British person to do something in a long time, probably is a lot more pressure than what I’m used to being an American. Serena is retired now, but she was always the American that people looked to.”

Raducanu, who became the first British woman since Virginia Wade at Wimbledon in 1977 to win a Grand Slam, said: “I think she is right about that!” Gauff beat Czech Katerina Siniakova 6-1 6-4 yesterday after going out in the first round here last year.

And Raducanu allayed fears about her injured right ankle by outclassing world No.76 Tamara Korpastch in confident fashion 6-3 6-2 in only 85 minutes.

The British No.1 wore a Nike skirt inspired by abstract art work and drank coconut juice in her post-match recovery to look at home Down Under. “I have no input no – they say: ‘You’re wearing’ this but yeah I really like it,” she said. “It’s quite colourful. I like exploring. Normally I’m quite plain and simple, so I’m venturing out of my comfort zone a little bit today.”