Paris: Novak Djokovic and Rafael Nadal are on a collision course for just their third quarter-final showdown in 15 years after the dominant duo were thrown together in a strong portion of the Roland Garros men’s singles draw.

World No.1 Djokovic returns to the major arena in Paris for the first time since last year’s US Open – when Daniil Medvedev stopped him winning the grand slam – after he was deported on the eve of January’s Australian Open over his choice not to have a COVID-19 vaccination. 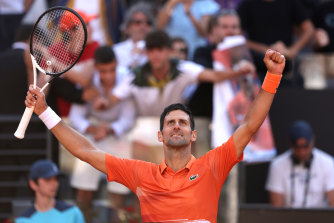 In order to win a 21st major title and draw level with the champion Spaniard on the grand slam table, Djokovic must manoeuvre his way through a tricky line-up, including potential tough final rounds against Nadal (quarter-final) and gun teenager Carlos Alcaraz (semi-final).

In the women’s draw, four-time major winner Naomi Osaka faces a daunting assignment against American Amanda Anisimova – the player who sent her packing in the Australian Open – as she returns to Roland Garros for the first time since her dispute with tournament organisers a year ago over participating in media conferences, a stand-off which resulted in her pulling out.

Former world No.1 Osaka has slipped in the rankings due to the tumult of 2021, a year in which she lit the Tokyo Olympics cauldron but took two breaks from tennis to focus on her mental health. Subsequently, the world No.38 was pitted against 27th seed Anisimova in a tough first round encounter.

Nadal enters the clay-court slam under an injury cloud, eerily similar to his Australian Open lead-up, a major he won with a come-from-behind finals win against Daniil Medvedev to secure major No.21. The Spaniard and Djokovic played two quarter-finals in 2015 and 2016, but they readily faced each other in the semis or finals countless times over a 10-year span from 2007 onwards.

Nadal, 35, starts his campaign to win the French title for a 14th time with an opening match against Australian Jordan Thompson.

Thompson was the unluckiest of the Australian contingent by drawing the clay king, but Queenslander John Millman, too, had it tough with a first round assignment against emerging American Sebastian Korda.

In the women’s draw, Australian wildcard Daria Saville had the fortune of drawing a qualifier. 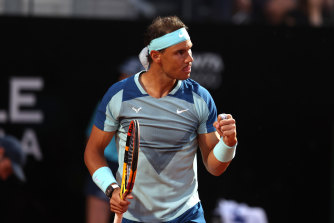 Rafael Nadal of Spain celebrates at a tournament in Italy this month.Credit:Alex Pantling/Getty Images

But the country’s highest-ranked woman without retired former world No.1 Ashleigh Barty, Ajla Tomljanovic, takes on world No.5 Anet Kovtaveit, of Estonia.