DAVID COVERDALE: Where would this year's Wimbledon be without Kyrgios?

DAVID COVERDALE: With no Roger Federer or Andy Murray to provide stardust and storylines at Wimbledon, thank goodness Nick Kyrgios came through against Brandon Nakashima… he may have just saved the second week

‘I think I’m lost without you,’ sang Freya Ridings behind a grand piano during the centenary ceremony on Centre Court on Sunday. It may well have been Wimbledon’s own ode to Nick Kyrgios.

For where would this year’s tournament be without the Aussie? Love him or loathe him, you cannot take your eyes off him.

According to the rankings, the 27-year-old is only the world’s 40th best player. But when it comes to box-office entertainment, he is No1. He has been dominating discussions, column inches and the focus of fans here and at home. 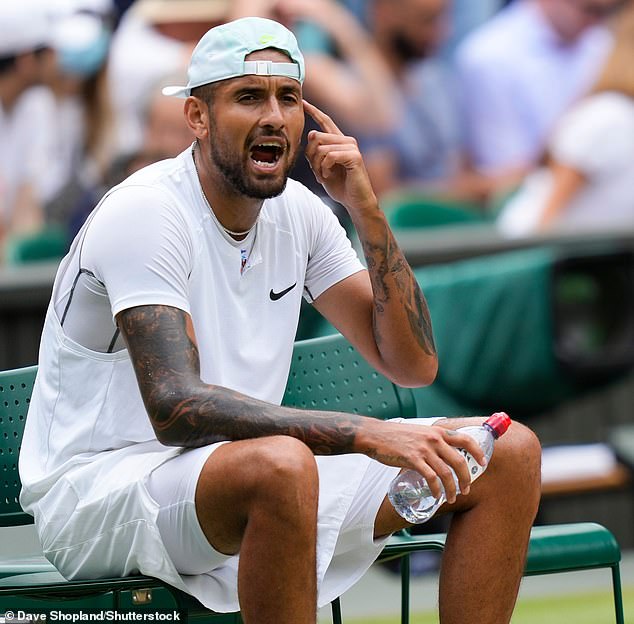 So, thank goodness Kyrgios came through in five sets against American Brandon Nakashima to reach his second Wimbledon quarter-final. He may have just saved the second week.

This year, there has been no Roger Federer to drool over on Centre Court. There has been no five set, late night, marathon matches from home favourite Andy Murray to get fans glued to their televisions.

British No1 Cameron Norrie’s run to his first Grand Slam quarter-final has yet to send pulses racing. While in the women’s draw, the only true household names – Serena Williams and Emma Raducanu – were both out by the first Wednesday.

So, it has been left to Kyrgios to provide the stardust and storylines. 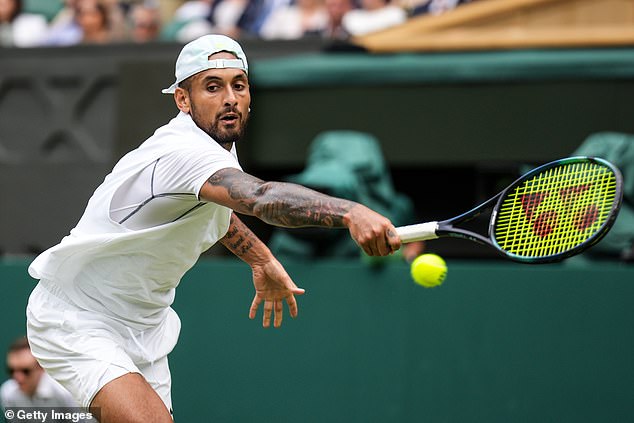 Whether you love him or loathe him, Kyrgios provides much in the way of entertainment

Cast your mind back over the last few days and which matches do you really remember? Probably Harmony Tan’s epic win over Williams on the second day. Perhaps the dramatic second-round victories by Brits Katie Boulter and Liam Broady last Thursday.

Ask most punters for their highlight, though, and it would be Saturday night’s showdown between Kyrgios and Stefano Tsitsipas.

‘Evil’ and a ‘bully’ were just two words Tsitsipas used to describe Kyrgios after their bad-blooded clash. Many might agree with the Greek and think Kyrgios is bad for the game.

But you can bet your bottom dollar they will still watched him. After all, any good drama needs a villain.

‘I know what I bring to the sport. I’m one of the most important people in the sport,’ Kyrgios said this week and it is hard to argue otherwise. 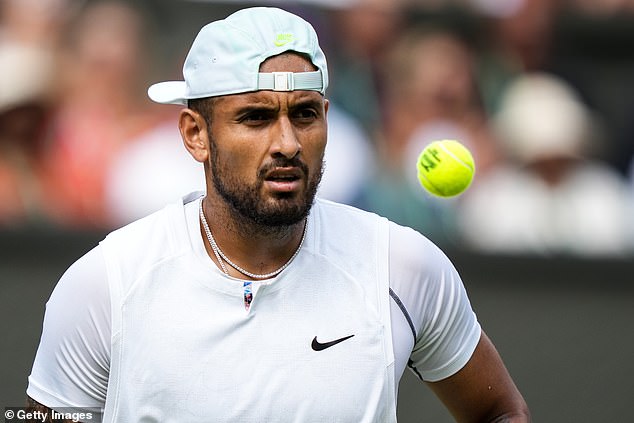 Tsitsipas might not like the Kyrgios ‘circus’, as he calls it, but paying punters sure do. And Wimbledon schedulers are also waking up to the entertainment he brings, for this fourth-round tie between two unseeded players would otherwise not have made it onto Centre Court.

Kyrgios keeps reminding the media of his popularity – both in the locker room and with supporters – and it was clear for all to see when he made his entrance. The crowd cheered him to the rafters and they received a wave in reply. From the off, there were far fewer empty seats than we have seen in other big matches on this grand old stage. 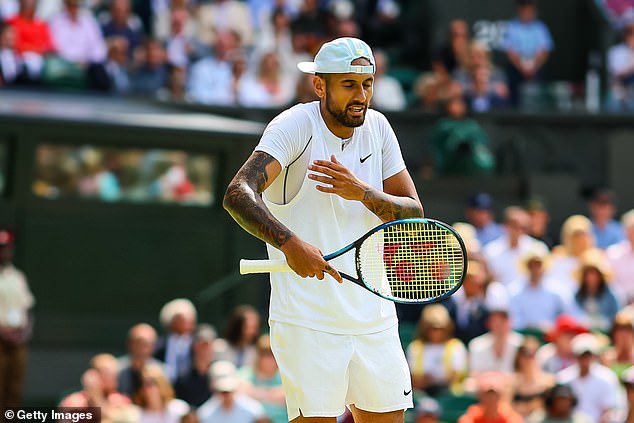 Admittedly, that sort of stuff divides opinion far less than his outbursts at officials, which has seen him fined twice already this tournament.

But against American Brandon Nakashima, he was, by his standards, on his best behaviour. Even if he did breach the all-white code by wearing a red cap and red trainers as he walked on and off the court.

There were just the occasional few chunters to the umpire and theatrical looks to the line judges. Nothing that will make its way to the referees’ office this time.

Of course, as this is Kyrgios, there were sub-plots. At 3-2 down in the third set, he called for the trainer and received a medical timeout to treat a troublesome shoulder injury.

Yet it did not stop him serving bombs and unleashing rockets from the back of the court, most memorably the cross-court forehand that clinched the third-set tie-break.

But in the fourth set, it was not Kyrgios’ shoulder that was causing problems, it was his head. 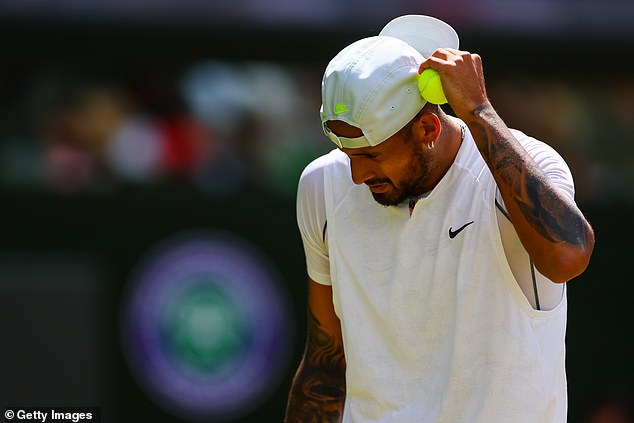 When he was broken in the seventh game, he turned to his box and bellowed ‘I’m trying, obviously, to make a first serve so stop saying that’.

Then, to make a petulant point in his next service game, he chucked in a serve at 74 miles per hour, pretty much throwing the game and subsequently the set.

In the third game of the decider, he took issue with technology after he challenged a Nakashima serve which proved to be comfortably in. As Kyrgios complained to the umpire, one fan shouted ‘stop moaning’ and received a round of applause. 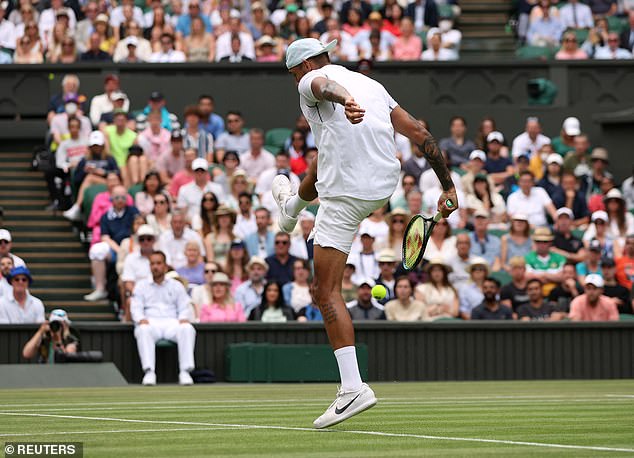 Yet the huge cheer Kyrgios got when he went on to break Nakashima in that game – and then again a few minutes later – proved who the majority of the crowd were really behind.

And when he served out the match to clinch his place in the quarter-finals, they rose as one to salute the man of Wimbledon 2022.

The big winners? Those with tickets to watch his next match with Cristian Garin on Wednesday.

Which Kyrgios they will witness, nobody knows. But boy, are they lucky to have the chance to find out.