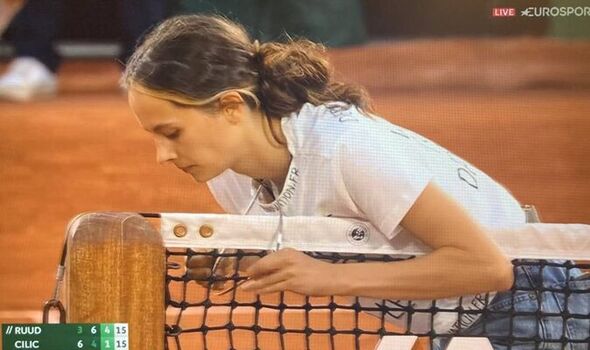 Marin Cilic and Casper Ruud’s French Open semi-final was briefly stopped after a protester chained herself to the on-court net. Ruud was 4-1 up in the third set when cameras panned on him as he appeared distracted by something before his serve.

Pictures then quickly saw a woman making her way onto the court and tying herself to the net. The woman appeared to be a part of the French activists Derniere Renovation. They tweeted: “22-year-old Alizée stepped onto the tennis court during the Ruud-Cilic semi-final to draw attention to the climate emergency and the demand for the Last Renovation campaign.”

On their website, a brief statement from Alizee was released following her move onto the court. It read: “We are in 2022 and it is time to face reality, the world to which politicians are sending us is a world to which Roland Garros will no longer be able to exist.

“Today, I entered the field because I can no longer take the risk of doing nothing in the face of the climate emergency”.