Carlos Alcaraz ignores Nadal comparisons after ending year as No 1 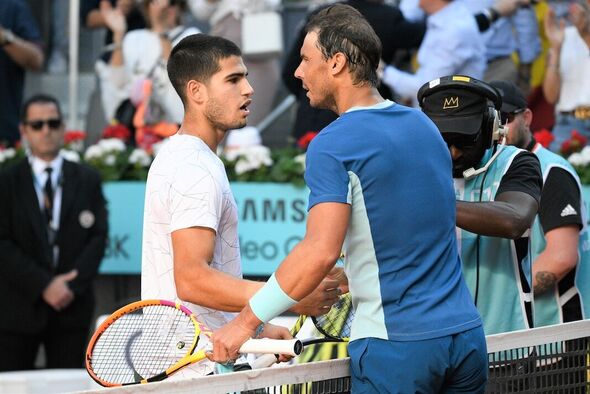 Carlos Alcaraz insists there is ‘no point’ in the inevitable comparisons with Rafael Nadal after the Spaniard ended the season as world number one. Alcaraz became the youngest year-end No.1 in men’s tennis history last week, despite being unable to play in the ATP Finals in Turin.

Alcaraz, 19, won the US Open this year and his remarkable rise has drawn similarities to his legendary Spanish compatriot. Nadal won his first Grand Slam at the French Open in 2005, his first ever time competing at Roland Garros, at the same age Alcaraz celebated glory at Flushing Meadows this August.

The teenager is seen as the future of men’s tennis after a stunning breakthrough season that also saw him claim two Masters titles. And he even reached the top of the rankings three years before Nadal climbed to the summit of the sport.

But while Alcaraz is thrilled to end the year with the status of being the best tennis player in the world, he is adamant that the storied career of 22-time Grand Slam winner Nadal renders such premature comparisons as pointless.

“There is no point in comparing,” Alcaraz said when asked about Nadal. It doesn’t matter that now I am world No. 1, Rafa’s entire career counts for a lot.”

Alcaraz is instead focusing on recovering from an abdominal injury that ruled him out of the season-closing ATP finals, as he looks to claim more major titles in 2023. But while he has blocked out the Nadal comparisons, Alcaraz concedes that he now has to cope with a newfound pressure of being the world No.1.

“The season is going to be difficult because I am going to start as the favourite and there is going to be a lot of pressure on me,” he added. “But I try to keep the good part and see that all this does not go to my head. In the end, beating your idols is an incredible achievement. I try to take it normally and never forget that whatever happens in the future, I have to enjoy tennis and play at my level.”

While Alcaraz ended the year as world no.1, few would argue that Novak Djokovic is the man to beat after he won a record-equalling sixth ATP finals trophy. Djokovic ended the campaign as world no.5 in a year where he couldn’t compete for ranking points at the US Open and Australian Open due to his vaccination status, and there were also no points up for grabs when he won Wimbledon.

Djokovic has been given the green light to play in January’s Australian Open after his ban from the country was overturned, and the Serbian has lofty ambitions as he looks to usurp Alcaraz at the top of the rankings next year.

“Overall the rankings are showing who had the best year, and Alcaraz is the No. 1 in the world,” Djokovic said. “Not much to say about that. But in my mind I always see myself as the best player in the world, of course. I have that kind of mentality and that kind of approach.”