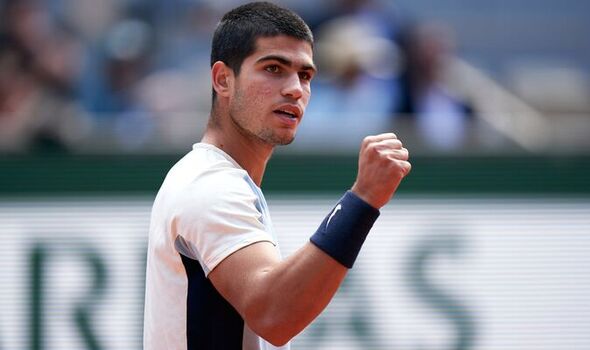 Carlos Alcaraz has claimed he has the level to win a Grand Slam title despite crashing out of the French Open to Alexander Zverev in the quarter-final. The 19-year-old was one of the favourites to win in Paris alongside Novak Djokovic and Rafael Nadal but already has his eyes on the next opportunity to win his first Major title, with Wimbledon weeks away.

Alcaraz suffered a four-set loss in his first-ever French Open quarter-final on Tuesday, as third seed Zverev scored his maiden top 10 win at Grand Slam level. But the teenager wasn’t left feeling defeated after his exit from the tournament, and instead left with the confidence to win his first Major title.

The five-time title winner also admitted he had learned some lessons from his second Grand Slam quarter-final but was still going out with his head held high. “I have to take the lessons [from] today. It was a tough match and close match,” the Spaniard said after the three hour and 18 minute match.

JUST IN: Djokovic accused of using ‘wrong tactic’ against Nadal at French Open

“I could say I didn’t start well, and in this level, quarter-final of a Grand Slam, you are playing against the best players in the world, so you have to start the match better than I did today. I have to improve for the next Grand Slam or next matches.

“I am going try to take the positive things of the match, and of course the bad things that I did, to improve to the next matches or next tournaments or next Grand Slams. I was close to a good match, close to a fifth set, and in the fifth set everything could happen. I’m going to take a lesson from this match.”

The world No 6 reached his first Major quarter-final at the US Open last year while ranked down at world No 55, having upset third seed Stefanos Tsitsipas en route. But he was forced to retire while 6-3 3-1 down to Felix Auger-Aliassime, and was already happy to have improved from his previous last-eight showing.