Ash Barty didn’t wilt in the humid conditions at the Miami Open, winning the final nine points to finish off No.7 seed Aryna Sabalenka in the quarter-finals.

The temperature hit 28 degrees in Miami on Tuesday but the humidity made it feel hotter, especially without any shade on the court. Barty and Sabalenka got a 10-minute heat break before starting the third set, though the defending Miami champion – from when the event was last held two years ago – looked like she didn’t need much downtime. 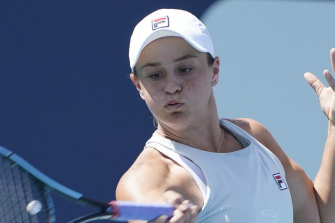 Ash Barty is through to the semi-finals of the Miami Open.Credit:AP

Barty faced seven break points and saved them all on her way to a 6-4, 6-7 (5), 6-3 win against the Belarusian. It was her third three-set win in four matches this tournament.

The Australian will meet either No.5 seed Elina Svitolina or Anastasija Sevastova in the semis. The duo face each other in the day’s later match.

The No. 7 seed from Spain fought off a match point before ousting former Miami champion and No. 18 seed John Isner of the US 6-3, 4-6, 7-6 (7) — his second three-set win in as many matches so far in the tournament.