Barty cruises into quarter-finals in Madrid

Ash Barty has continued her stunning claycourt form with victory over Iga Swiatek in the Madrid Open third round.

The world No.1 overcame a slow start to beat the Polish teenager 7-5, 6-4 in the Spanish capital on Monday (Tuesday AEST). The Australian went 0-3 down in the first set but fought back to book her place in the quarter-finals, where she will face Petra Kvitova. 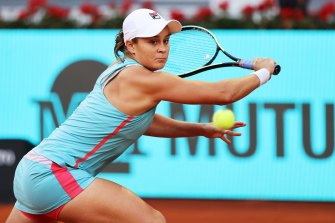 Ash Barty delivers a backhand during her victory over Iga Swiatek.Credit:Getty

Barty is now unbeaten in 14 matches on clay.

“I really enjoyed myself out there tonight,” she said after beating 14th seed Swiatek. “I enjoyed the challenge. Iga’s game is exceptional. It’s really, really impressive. I love testing myself and trying to figure out the puzzle tonight and the challenges that she created for me.

“I love the way that she plays. I love the way she takes the game on. She plays without fear. I think the way she controls the court, has the ability to move and neutralise from defensive position is very, very impressive.”

Despite the early stumble against Swiatek, Barty never looked in danger and did not face another break point in the opening set.

“I think probably the first half an hour was a bit of an adjustment period for both of us,” she said. “I think it took me some time to get used to Iga’s weight of shot. Obviously, we had a game plan going into it, but I had to adjust that and had to kind of learn on the fly a little bit.

“It took me some time to get used to that and kind of nut down what I really wanted to do out there. Once I was able to do that, I became a lot more clear and was able to control the match a little bit more the way that I wanted to.”

The win takes Barty’s record this year to nine wins from nine games against top 20 players. Barty has faced Kvitova nine times, with the Czech holding a 5-4 edge. The No.9 seed beat Russia’s Veronika Kudermetova in three sets on Monday.