Barty bounces back in style after latest ‘sabbatical’

When Ashleigh Barty walks out to play her first-round match in Paris this week, she will be on day 73 of a world tour that has already taken in Miami, Charleston, Stuttgart, Madrid and Rome.

Barty and her long-serving coach, Craig Tyzzer, expect to continue through the Tokyo Olympics and the American hard-court swing before heading home. 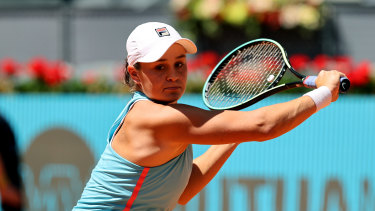 Ashleigh Barty plays a backhand during her third round match in Madrid against Spaniard Paula Badosa.Credit:Getty Images

‘Twas ever thus for Australian tennis players. Where their European counterparts nip back between tournaments to wash their socks, Australians spend nine months of the year marooned 10,000 miles from their families. In such circumstances, the impact on a young player’s mental health can be significant. When she was 18, Barty became so demoralised that she stepped away from the game for 18 months.

Her father Robert has acknowledged that “we never thought she would be back”, so this was an alarming time. And even though Barty did resume – with ever-improving results – the home-sickness remained. In the summer of 2019, she told The Telegraph that “it gets harder every year” to leave Australia. 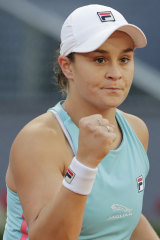 This season, though, has delivered a dramatic shift. Instead of dragging herself from one event to the next, Barty has been bouncing through press conferences, joshing with reporters, and celebrating the joys of life. Take her press conference in Paris on Friday. When asked about her touring experiences this season, Barty replied that “everything has been positive, it’s been quite seamless and it’s been awesome to be out here playing tournaments back-to-back”.

What has changed? One might have expected 10 weeks of virtual imprisonment to worsen Barty’s angst. Yet the reverse is true. According to Tyzzer, the strange new reality of bubble life has had its upsides.

“Being at home through most of 2020 gave us a different look at everything,” Tyzzer said last week.

“Being able to spend time at home, realising it is actually a pretty good situation to be in to be able to go and play tennis for your job and enjoy it, there was a shift in perception for both of us. We realised that there are worse things going on out there at the moment with COVID.”

When the tour was suspended last March, Barty had been in fluent form. Tyzzer was initially frustrated at having to break off just when she was building on her first major title – the 2019 French Open – and reinforcing her new-found status as world No.1.

For Barty herself, though, the suspension was a chance to catch up on other parts of life. She hunkered down at home in Brisbane, playing in golf tournaments and drinking beer at AFL matches. Even when the cogs of tennis began to turn, first with the US Open and then with the opportunity to defend her Roland-Garros title, she declined to participate.

Now it seems that the past 18 months have acted as a reprise of that first sabbatical in 2015 and 2016, when Barty’s heroine and mentor, Evonne Goolagong Cawley, advised her to pick up a fishing rod and “go and wet a line”. Perhaps this more recent bout of R&R was not as essential, but it still seems to have recharged her batteries.

“We both felt it was nice to be home for a longer time,” Tyzzer said. “But for me, I had only got to five or six weeks in before I actually started to miss the travel and the tournaments and the work. And then we went into complete lockdown in Melbourne, and I couldn’t go more than 5k with my family, so we spent a lot of time together.

“As for Ashleigh, she was a bit freer, able to go to the football, go watch friends play cricket. I think she got that out of her system. Since then, she has been fully invested and fully involved and playing good tennis.”

Admittedly, the first stages of their departure from Australia in mid-March were chaotic. So few people were travelling at the time that flights kept being cancelled or rearranged, and it took 50 hours to travel from Sydney to Miami. As a result, Barty was still a couple of days short of “being right” – in Tyzzer’s words – when she played her first match outside Australia for over a year. Up against Kristina Kucova, an unheralded Slovak ranked No.147 in the world, she had to come back from 3-5 down in the deciding set, saving a match point along the way. But come back she did, and that has set the tone for a run of two titles and a runner-up spot in five events.

“Although we’re in bubbles and it’s restrictive,” Tyzzer said, “I feel like that keeps it quite simple. Your focus is just tennis. There are no functions she has to attend, no sponsor parties, just a few press conferences [which Barty, by contrast with world No.2 Naomi Osaka, is perfectly comfortable with].

“She has gone through quite a few series of different books since we’ve been on tour.”

It all sounds like a remarkably happy camp, even if Tyzzer admits that he and Barty will probably take short holidays in different spots after the Olympics, just to have a break from each other.

Despite the idyllic picture that Tyzzer paints, Barty has had one cause for anxiety of late: the right arm problem which forced her to retire from her quarter-final in Rome.

Still, he insists that this will not hamper her in her first-round match against tricky American left-hander Bernarda Pera. “It’s a bit more in the bicep than the shoulder, but nothing new – it flares up sometimes when the balls are heavy,” Tyzzer said.

Since that minor setback in Rome, they have been training together in Nice.

“We were down in the south of France,” said Barty on Friday, with a beaming smile. “It was beautiful, weather was great. We were at a very small club, which for me was perfect. We were able to do exactly what we wanted on court, control my training loads, and make sure my body was 100 per cent.”

If Barty had a motto for her 2021 season, it would be a very Australian one: No worries, mate.