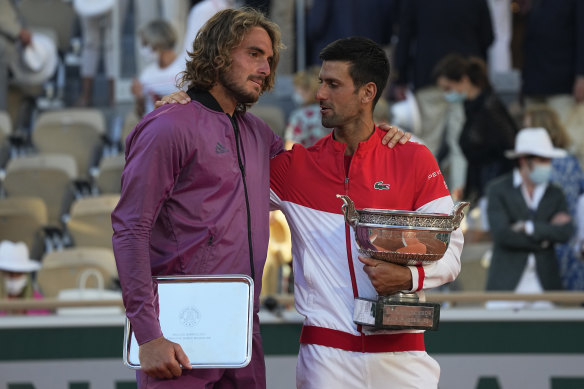 Reminded of this, his memory suddenly returned: “That’s right. Sorry, my bad. I wanted to compliment him because he’s someone who looks ready to go for the title, and the way he has been playing, he’s been coming closer and closer.”

Was Djokovic simply forgetful, or is he playing sophisticated mind games – 4D chess, let’s say – with the highest-ranked player left in the draw?

After all, Djokovic has won 21 grand slam titles from a record 32 finals, compared to Tsitsipas’ one.

Good morning tennis fans and welcome to day ten of the Australian Open. Getting down to business end of things now!

We’ll have rolling coverage throughout the day to keep you updated with scores, news and anything of note from the day and night sessions.

The quarter-finals continue in the women’s and men’s singles, as Novak Djokovic, Andrey Rublev, Karolina Pliskova and Aryna Sabalenka take to the court.

Play starts at 11am AEDT and will run until late tonight, please feel free to leave a comment on the blog at anytime and enjoy the day to come.