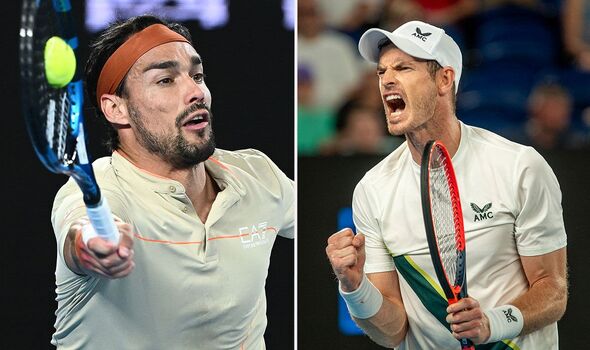 Andy Murray could have faced Fabio Fognini in the Australian Open second round but the Italian veteran has now been accused of ‘tanking’ his opening clash at the first Grand Slam of the year.

Murray sealed the best victory since career-saving hip surgery four years ago as the legendary Brit rolled back the years against Fognini’s compatriot Matteo Berrettini in a five-set thriller.

And Murray’s inspirational win set up another tasty tie against either Fognini or home hopeful Thanasi Kokkinakis. But Murray is now almost certain to face Kokkinakis in round two after his match with Fognini was suspended when the Aussie was just five points from victory.

Play had been suspended on Tuesday afternoon in Melbourne Park due to extreme heat and rain caused further havoc in the evening session as players left the court for a third and final time for the night with Kokkinakis leading 6-1 6-2, 4-2, with Fognini serving at 15-40.

And Murray’s next opponent almost seems a foregone conclusion when play resumes after Fognini was slammed by tennis fans for ‘tanking’ the match after showing a ‘disgraceful’ lack of effort against Kokkinakis.

Fognini, a former world no.9, hit 23 unforced errors before rain stopped play and his energy levels and desire quickly came into question on one of the sport’s biggest stages.

Tennis commentator Craig Gabriel said: “Is Fabio Fognini on the court playing Thanasi Kokkinakis?”  There is someone there. Looks like Fognini but like a shadow as Kokkinakis leads 6-1, 6-2.”

Another fan who claimed to be inside the arena opined: “Being at the match, it’s pretty clear Fognini is not giving his best effort. Tanking at its finest. Big fine coming.” And one disgruntled fan agreed, writing: “He’s a disgraceful advertisement for men’s tennis.”

Another fan made reference to the prize money he’ll receive for exiting in the first roud. “Will pocket his $100k and off he goes,” one fan claimed.

Round one losers at the Australian Open receive a cool payday of $106,250 (£60,500) in a huge prize money pool and Fognini looks in line for the sum, unless he makes the most extraordinary of comebacks against the dominant Kokkinakis on Wednesday.

Regardless, former Aussie Open finalist Murray will have no qualms about facing either Kokkinakis or indeed Fognini after his monumental victory over Berrettini. The battling 35-year-old expressed his pride after holding off a fightback to stun the world no.13 in a fifth-set tie-break and claim his 50th win in the tournament.

“The last few years, I’ve certainly questioned myself at times,” he said. “There’s certainly a lot of people who’ve questioned me and my ability, whether I could still perform at the biggest events and the biggest matches.

“I felt very proud of myself after the match. That’s not something that I generally felt over the years at the end of tennis matches.

“I think I’m proud of the work that I put in the last few months. I trained really, really hard over in Florida getting ready to play here. I’m really proud of how I fought through that match at the end when it could have got away from me, how I played in the tie-break at the end.”