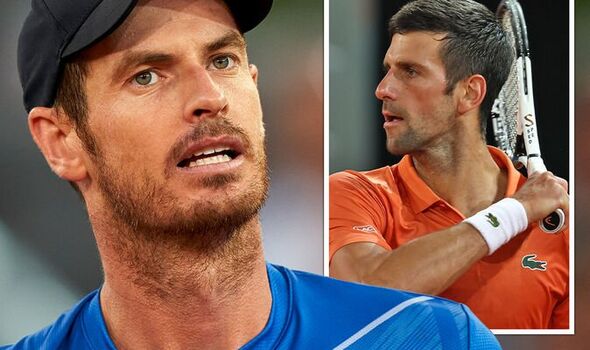 Andy Murray has withdrawn from his Madrid Open third-round clash against Novak Djokovic in the 11th hour due to illness. Murray was set to reignite his rivalry with the world number one for the first time since 2017 in the Spanish capital.

On Thursday morning, just one hour before the two tennis icons were scheduled to take to the court, the Madrid Open confirmed that Murray was unable to make it to the Manolo Santana Stadium through illness. The tournament has confirmed Andrey Rublev and Daniel Evans will showcase the day’s first match on Centre Court.

It comes as a significant blow for Murray and his fans after he was entering the highly-anticipated match on the back of his biggest win of the season so far. The Scotsman beat 14th-seeded Canadian Denis Shapovalov 6-1 3-6 6-2 in the second round to set up a meeting with his old foe.

Djokovic cruised past France’s Gael Monfils 6-3 6-2 in his opening match of the tournament and will receive a bye into the quarter-finals due to Murray’s withdrawal. He is now just three wins away from his first piece of silverware in a troublesome, and disrupted, 2022 season so far.

JUST IN: Murray working with ex-Chelsea doctor Carneiro in bid to extend career

After toppling Shapovalov in the previous round, Murray expressed his excitement about reuniting with Djokovic on the court, although he admitted he should have had ‘no chance’ of progressing. “In theory, I should have no chance in the match,” Murray explained.

“He’s obviously number one in the world, and I’m playing with a metal hip, so I shouldn’t have a chance in the match. It’s a great opportunity for me to see where my game’s at and to play against him. We’ve had so many great battles over the years in some of the biggest tournaments in the world.”

He continued: “We played in the final, I think, of all four Grand Slams, we played here in the final, and I haven’t had the opportunity to play against him for a long time. I didn’t know if I ever would get that chance, so I’ll enjoy it. I’ll have a fantastic attitude in the match, give it my best and see where I’m at.”

Djokovic will continue his preparations ahead of his return to Grand Slam competition at Roland Garros later this month. After missing the Australian Open at the start of the year, the Serb will be hoping to replicate his success last year and once again topple Rafael Nadal and his other rivals on the clay.