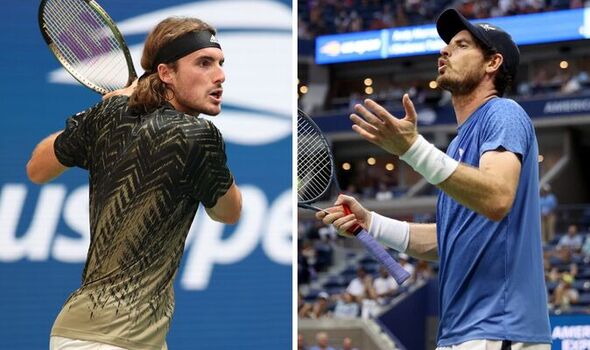 Andy Murray will face Stefanos Tsitsipas for the first time since their fiery US Open first-round meeting last year. The Brit accused the world No 5 of “cheating” when he took a lengthy bathroom break before coming from behind to win in five sets, and later doubled-down on his comments with a Jeff Bezos dig.

Murray and Tsitsipas will clash in the Stuttgart quarter-final on Friday – their second meeting after a five-set battle in the opening round of the US Open ten months ago. The 35-year-old was leading the then-third seed by two-sets-to-one during the clash but ultimately lost in five as the Greek took an eight-minute toilet break after narrowly closing out the fourth set.

2012 US Open champion Murray fumed early in the fifth set, ranting to ATP Tour supervisor Gerry Armstrong who was sat courtside, saying his opponent was “cheating” and adding: “The toilet is right there, what’s he doing? It’s never once taken me that long to go to the toilet, ever. And it’s right there.”

The former world No 1 then took another jibe at his opponent on Twitter days later, writing: “Fact of the day. It takes Stefanos Tsitipas twice as long to go the bathroom as it takes Jeff Bazos to fly into space. Interesting.” Murray will now try to get revenge over the 23-year-old in their first meeting since the fiery US Open clash on the grass courts of Stuttgart.

JUST IN: Federer shares comeback schedule and ‘problem’ he’d like to have

Following the bathroom break drama, the ATP Tour implemented a new rule this season allowing players three minutes to go to the bathroom and an additional two minutes – five all in – to go and change clothes, so there will be no repeat of the drama from Flushing Meadows. And Tsitsipas has instead shared some kind words for Murray ahead of their second meeting.

“Andy is one one of the best grass players. He’s been out injured but he’s been getting some good wins against some of my peers,” the top seed at the Boss Open said of the world No 68, then claiming that the three-time Major champion was a “favourite” in Stuttgart.

“His game is absolutely there, he’s one of the favourites here. He’s had a lot of grass battles and a lot of good wins,” the world No 5 added, before talking up his own chances too. “My game is built for grass courts, I can 100 per cent have good results on this surface.”

Meanwhile, Murray is hoping to capitalise on his current momentum to overcome the top seed and advance to a second-successive semi-final after reaching the last four at last week’s Surbiton Challenger. Speaking after he beat Alexander Bublik in the previous round, he said: “It’s nice to be back at this stage. This was a solid win and I’ll try and push through to the semis.”