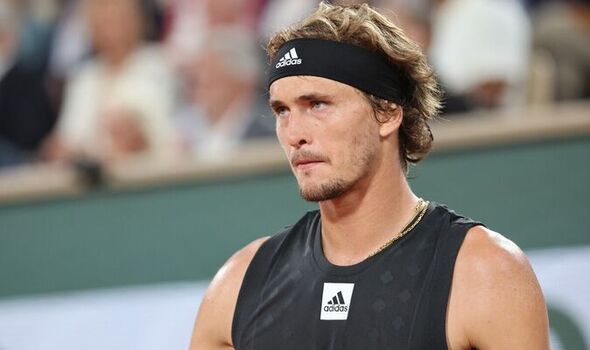 Alexander Zverev dropped out of the top 10 of the ATP rankings for the first time in five years on Monday as he continues to remain sidelined by injury. The German has not played since going down in pain during his French Open semi-final match against Rafael Nadal but will finally be back in action next month after signing up for a series of exhibitions.

Zverev looked to be on a path to what could have been the best season of his career before it was derailed by injury. The world No 12 was facing Nadal in the semi-finals of the French Open when he went down screaming in pain, needing a wheelchair to be taken off the court before he re-emerged on crutches to officially retire from the match.

The 25-year-old later revealed he had snapped ligaments in his ankle and underwent surgery with his comeback set for September’s Davis Cup tie, but when he was about to return to competition he learned he had a bone edema and required a new operation. As the end of the season nears, Zverev has now found himself at a five-year ranking low as he dropped outside of the world’s top 10 for the first time since July 2017.

The German now sits at No 12 in the world after his points for making the semi-final of the 2021 Paris Masters were removed from his ranking on Monday, though he finally looks set to return to the match court soon and will be bidding to climb back up near the top after reaching a career-high of world No 2 in June – ironically after he had played his last match of the season.

Zverev has signed up for two exhibition tournaments in December, which will serve as the perfect practice to get some matches in before the official 2023 season begins in January. The 19-time title winner will play the Diriyah Tennis Cup from December 8 to 10 before heading to Dubai for a new team tournament, the World Tennis League.

The world No 12 is part of Team Hawks during the mixed-gender tournament being staged from December 19 to 24, as he will play alongside this year’s Wimbledon women’s champion Elena Rybakina as well as Anett Kontaveit and Dominic Thiem, while the likes of Novak Djokovic, Nick Kyrgios and Iga Swiatek will play in the rival groups.

Zverev had initially held out hope that he could represent his country at the Davis Cup Finals at the end of this month but was ruled out when Germany’s captain Michael Kohlmann left him out when naming the squad, saying: “At the moment it doesn’t look like Alexander Zverev will be ready for action again until the Davis Cup.”

Meanwhile, the former world No 2’s brother Mischa said Zverev was hoping to emulate Djokovic’s recent success when he eventually returns to the tour, as the Serb won two titles in Tel Aviv and Astana immediately after he was left unable to play for three months during the North American swing as a result of his unvaccinated status.

“I think that’s incredibly strong. Novak comes back, wins two tournaments – and that’s it. Obviously he wasn’t injured and he’s only had one break, but he comes on with a lot of confidence and plays his thing down,” Mischa – himself a former world No 25 – said.