World No. 2 Alexander Zverev is preparing to roll out ‘Version 2.0’ after a month on the sidelines. The German suffered serious ligament damage after badly rolling his right ankle during a semi-final clash against Rafael Nadal at the French Open in June.

Zverev, 25, limped away from Paris and underwent surgery soon after, though it wasn’t enough to prevent him from missing Wimbledon. But it appears he’s closing in on a return to fitness after providing fans with a much-anticipated update on his condition.

It was only last week that Zverev shared videos and photos with his 1.8million Instagram followers of him training in the gym. However, this is the first that’s been seen of the 2020 U.S. Open finalist without his protective boot since his latest injury.

The player walks unaided toward the camera with nothing except a light brace around his right ankle, chuckling as he gave his subscribers a double thumbs-up. He’s not in the clear just yet, however, given a pair of crutches can be seen in the gym background, while his lack of mobility suggests running likely remains out of the question. 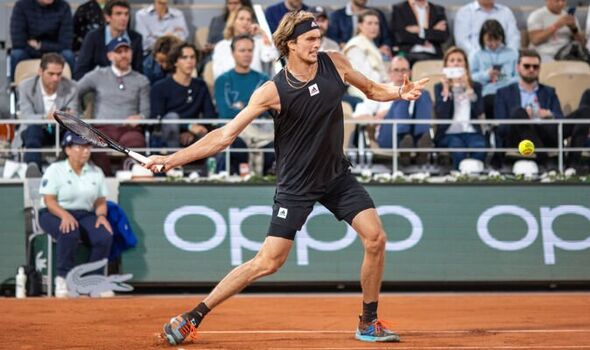 Many supporters are hoping Zverev is fit to feature at the 2022 U.S. Open, which is set to get underway in New York on August 29. The major’s official Instagram account replied to Zverev’s post with a pair of watchful eyes some applauding hands, hopeful one of the sport’s biggest names will be back to his best at Flushing Meadows.

Zverev’s older brother, Mischa, responded “A small step in the gym, but a big one towards….” followed by a trophy emoji. Russian pro Elena Vesnina and German international footballer Kevin Volland—who, like Zverev, is based in Monaco—also shared messages of support in the comments section.

Tennis fans winced when Zverez was reduced to a writhing mass after awkwardly slipping while he trailed Nadal 6-7, 6-6 in France. The prospect returned to the changing rooms to be more closely assessed by a doctor at the time, but it was immediately evident the blow would be too severe to continue play.

Despite failing to finish the French Open, the two-time ATP World Tour Finals-winner climbed to second in the world rankings last month and is yet to move. Zverev will hope the recovery is quick enough to preserve his career-best ranking, not to mention bag him a place in the U.S. Open draw next month.