A Fortnite at Wimbledon: Inside Nick Kyrgios’ transformation

There was a time when the only control Nick Kyrgios had in his life was the one he used to play video games.

A fortnight at Wimbledon once took on an entirely different meaning for the 27-year-old Australian, who is now one win away from the first grand slam title of his controversial career.

“He’s finally appreciating where he is, that’s the best thing about all this,” his mother Nill Kyrgios told The Herald and The Age on Thursday night.

“Beforehand it was so hard for us to get him to do anything. He was happy to sit in his room and play video games all the time. His shoulder would hurt him from how much he would play.

“In Beijing we wanted him to walk the Great Wall of China with us. Who wouldn’t, right? But Nick wouldn’t go. He was happy to sit in his room and order in, that’s what worried me.

“I remember in Canada we said, ‘Let’s go to Niagara Falls’. He wouldn’t even go there. I actually went on my own on the tour bus. Nick wouldn’t want to do those things. Wow, there’s such a difference now. I see it on his stories. It’s probably the first time he’s been to Big Ben. All the time he’s been to London, he hasn’t gone anywhere. 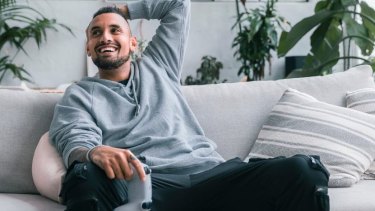 “Since the Australian Open this year, he has started doing some things. Because he now understands that life doesn’t revolve around tennis. No one expects him to be like that. You have to enjoy your life. I’m really happy he is now.”

The transformation isn’t just mental and emotional either. There is a physical transformation that has finally allowed Kyrgios the opportunity to maximise the undoubted talent he has possessed for the best part of the last decade.

The criticism of Kyrgios, apart from his on-court antics, has long been question marks over his body’s ability to withstand the rigours of two weeks of tennis to win a grand slam.

The man behind the transformation is his long-time friend and physiotherapist Will Maher, who has built a trust and understanding with Kyrgios that few have before.

Maher has become a mentor to Kyrgios, who has embraced a sleep-eat-train-treat regime required to compete at the highest level.

Maher indulged Kyrgios’ desire to adopt a basketball-focused training schedule in the lead-up to Wimbledon and has been working around the clock to keep the world No.40 in shape.

Part of that is a significant dietary change. Kyrgios has been vegan for a few years, however, he has added seafood to his meals after noticing a dip in energy due to what he believed was a lack of meat in his diet.

Maher is living with Kyrgios inside a house at Wimbledon Village, working around the clock to make sure the Australian is in peak condition for the biggest fortnight of his career.

Maher’s relationship is so strong that the physiotherapist also treats the rest of the Kyrgios family at his Accelerate Physiotherapy practice in Canberra.

Watch all the action from Wimbledon ad-free, live & on demand on Stan Sport, with matches streaming in 4K UHD. Coverage of select matches commences on 9GEM from 7:30pm AEST each night.