Will Forest or Huddersfield make the Premier League in £135m game?

Huddersfield have the form, defensive resilience and Wembley experience but Nottingham Forest boast more potential match-winners as they try to reach the Premier League… so, who will have the edge in Sunday’s £135m Championship Play-off final?

The figure seems to swell with every passing year but Sunday’s Championship play-off final will be worth at least £135million to one of Nottingham Forest or Huddersfield Town.

That was the estimated windfall, over three years, calculated by accountants Deloitte in 2020 if the promoted side stays just one season in the Premier League.

If they stay up and enjoy a second campaign in the top-flight, that figure rises steeply to £265m over a five-year period. Either way, the cash is transformative. 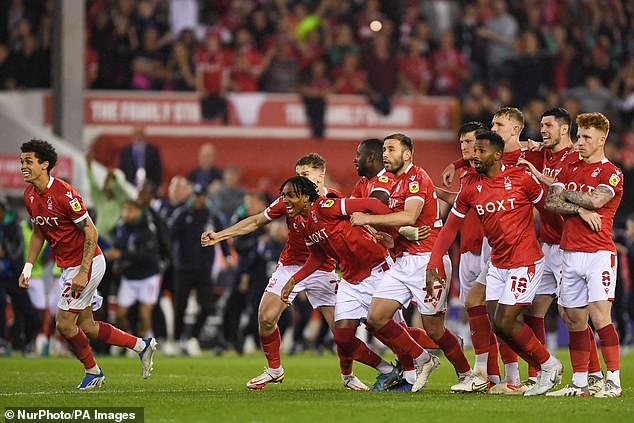 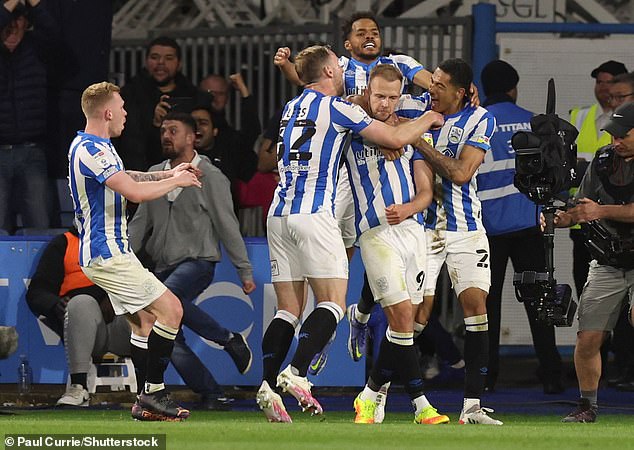 It’s why, after nine gruelling months, the Forest and Town players will rouse themselves for one final effort this Sunday afternoon at Wembley Stadium.

But which of the two teams is better equipped to win promotion in what is sure to be a nerve-shredding encounter? Sportsmail takes a look in our play-off preview.

Huddersfield definitely go into Sunday’s final with the better momentum and are nine matches unbeaten.

That includes their semi-final win over Luton, which saw Danel Sinani’s goal earn them a 1-1 draw at Kenilworth Road before Jordan Rhodes scored the 82nd-minute winner in a tense second leg to send them to Wembley.

They ended the regular season with four consecutive wins and seven games unbeaten, keeping them in the running for an automatic promotion spot until the final week of the season and giving them crucial momentum after finishing third.

Forest had to pick themselves up after a 1-0 defeat at Bournemouth ended their hopes of finishing second in the final week and a last day draw at Hull saw them come fourth. 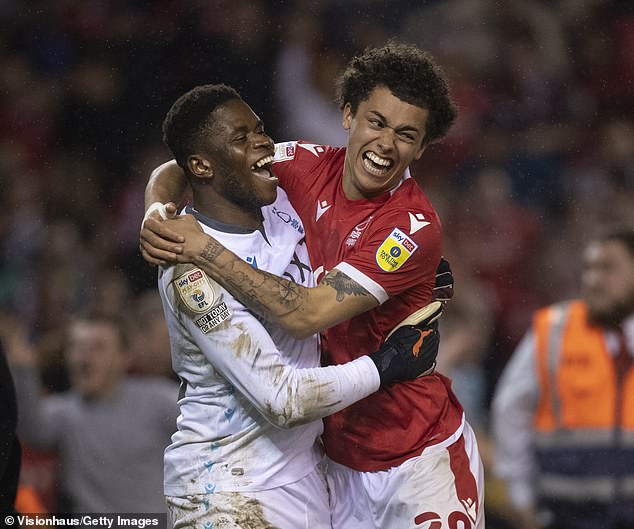 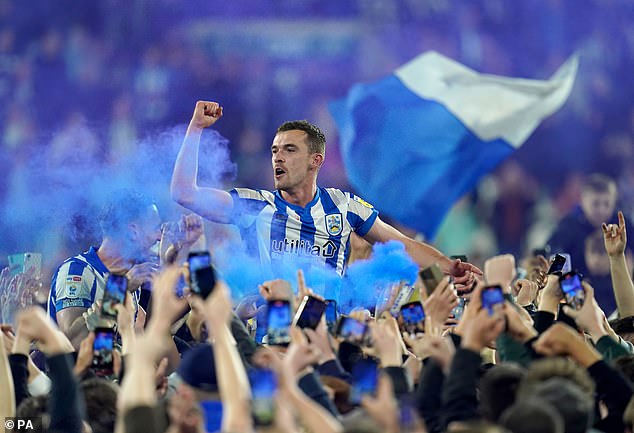 Their semi-final against Sheffield United, quite frankly, should have been considerably more straightforward than they made it.

Leading 2-0 in the first leg at Bramall Lane heading into stoppage time, having controlled the game, they allowed Sander Berge to head home a late response to keep the Blades in contention.

And after Brennan Johnson’s strike in the return at the City Ground put them 3-1 ahead on aggregate, it all seemed done and dusted.

That Forest almost blew it from that position of strength is alarming. Two second-half goals from the Blades took it to extra time and Forest eventually prevailed on penalties thanks to heroics from keeper Brice Samba.

Their near-collapse will have given Steve Cooper plenty to ponder during the 10 days since that game.

It’s been 30 years since Forest last played at the national stadium – Brian Clough was still in charge when they lost 1-0 to Manchester United in the 1992 League Cup final.

They are one of a handful of EFL teams who haven’t walked out at the new Wembley but that will finally change on Sunday when they bid to return to the Premier League after 23 years away.

So Forest certainly aren’t flush with experience of playing there. Huddersfield, by contrast, are.

They won promotion to the Premier League there in 2017, beating Reading 4-3 on penalties after a thoroughly uninspiring goalless draw. In 2012, the Terriers made it into the Championship by beating Sheffield United in a shoot-out.

It’s bound to count for little, but at least Huddersfield have some experience of playing under the arch. 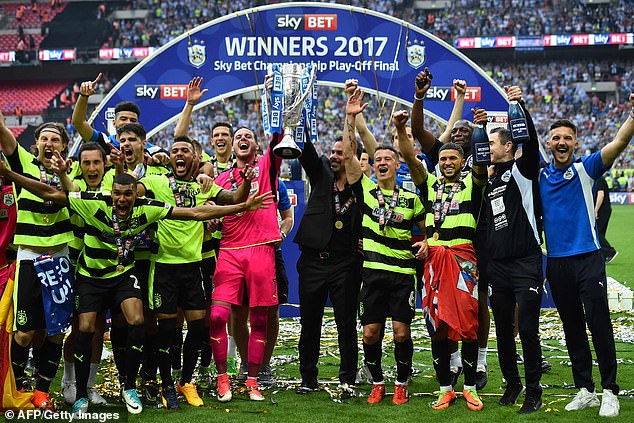 Honours even. Back in September, just a few days after Forest sacked manager Chris Hughton and with caretaker Steven Reid in caretaker charge, they won 2-0 at the John Smith’s Stadium.

That was Forest’s first Championship win of the season at the eighth time of asking, earned courtesy of goals by Lewis Grabban and an own goal by Town keeper Lee Nicholls.

Nonetheless, Forest remained rooted to the bottom of the table as Cooper was appointed three days later. 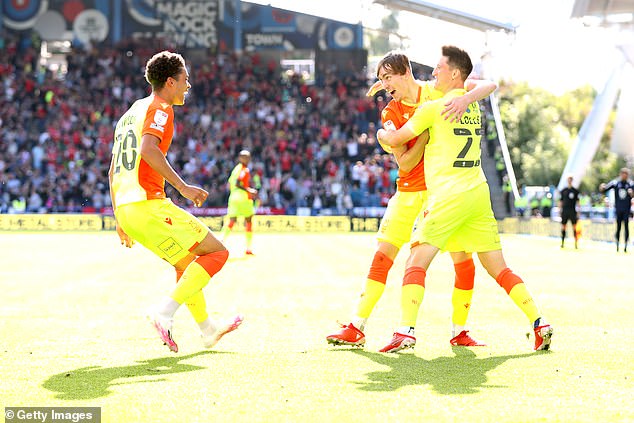 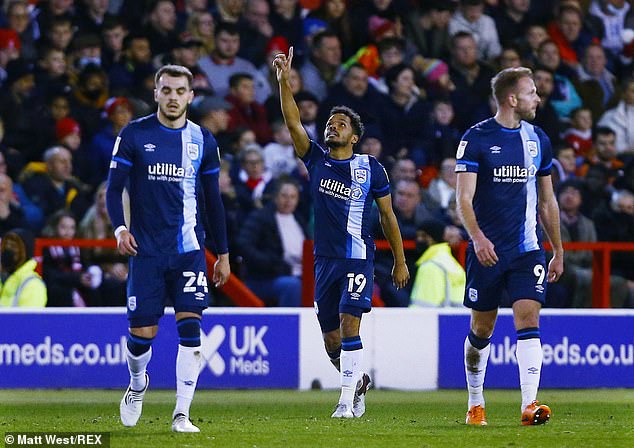 In the return at the City Ground on December 30, Huddersfield claimed a 1-0 win courtesy of a goal by Duane Holmes that strengthened their grip on the play-off places.

Forest were ninth at that point, five points off the top six, but now they meet again with everything on the line.

They then met in the fifth round of the FA Cup in March, with Forest winning 2-1.

Two managers who have had a transformative effect on their respective clubs this season.

Carlos Corberan, the Spaniard who was a close confidant of Marcelo Bielsa at Leeds before striking out alone into management, feared the sack after Huddersfield finished 20th in his first season (2020-21).

It was the players who recognised that despite disappointing results, Corberan was laying the foundations for something potentially special at Huddersfield. 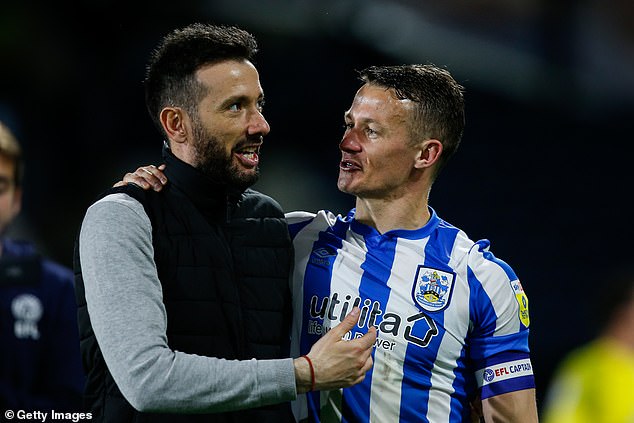 Captain Jonathan Hogg was among those who convinced the club’s hierarchy that Corberan should be kept on and that decision has proved a wise one as they target a Premier League return after two seasons away.

They aren’t the most exciting team to watch in the Championship but they are certainly resolute. They kept 19 clean sheets from 46 games, with only Bournemouth and Sheffield United boasting a better record.

Huddersfield will probably look to curb Forest’s aggression during the early stages of the game at Wembley, make sure they’re in the contest and then look to strike a blow.

Corberan’s team have impressed with their tactical flexibility, which makes it difficult for opponents to second guess how they’ll set up. 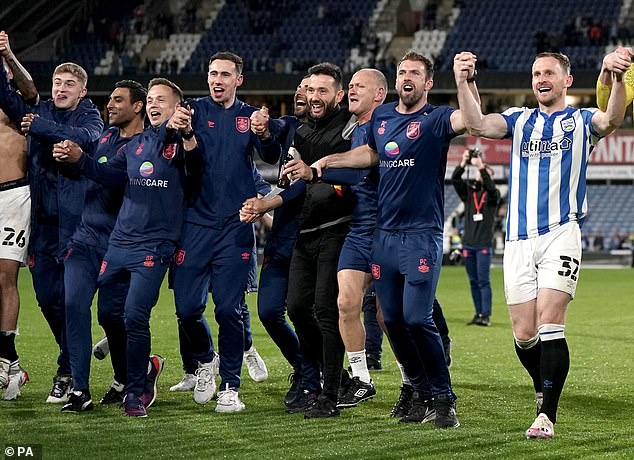 Cooper, meanwhile, came in at Forest when they were on their knees but has turned the club around and restored optimism to the city in a remarkably short period of time.

Having led Swansea to the play-offs twice in recent years, he has done so again with Forest and all while playing a brand of football that’s pleasing on the eye.

Rock bottom when he arrived, results turned pretty much instantly and they just continued to climb the table, as well as embarking on a run to the quarter-finals of the FA Cup.

Welsh coach Cooper listened to each of his players in one-on-one sessions, restored positivity to the place and resolved to engage with the club’s illustrious past rather than be burdened by it. 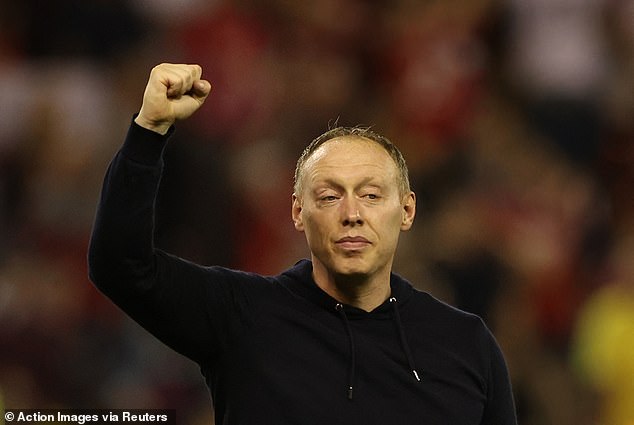 His attention to detail and dedication to bringing on young players – he won the Under-17 World Cup with England in 2017 – have helped to make Forest an attractive side to watch.

Now Cooper’s final mission this season is to end Forest’s long wait to get back to the Premier League and the miracle will be complete.

Huddersfield have looked to Sorba Thomas, their Wales international winger, for creative inspiration all season long.

Thomas, who has just signed a new long-term contract with the Terriers, has set up 15 goals this season and it was little surprise his free-kick delivery set up Rhodes for the semi-final winner.

Having injured a bone close to his knee late in the season, Thomas only played a bit-part role off the bench in both legs against Luton and Corberan will be desperate to have him fully fit for Sunday. 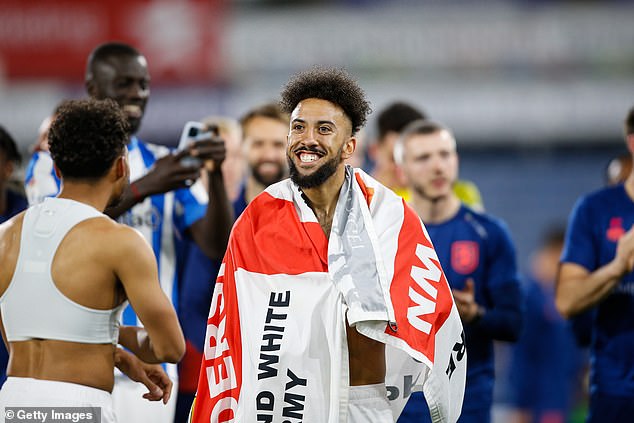 Danny Ward, the 31-year-old striker who is a veteran of the club’s play-off success in 2012, has been their leading scorer with 14 goals this season.

Hogg, 33, was part of their last elevation to the Premier League and the captain who leads by example with his hard graft and dedication sees similarities between the two squads.

‘The togetherness that we’ve got, the mentality, is second to none and I think both squads had that in abundance,’ he said during their training camp in Portugal ahead of the final.

‘It plays a massive part in what we’re trying to do here, we want everyone to stick together, everyone to glue, and build a family to get to where we want to be.’

Levi Colwill, the 19-year-old centre-back on loan from Chelsea, has also impressed with a maturity beyond his years and has been linked with a move to Frank Lampard’s Everton this summer. 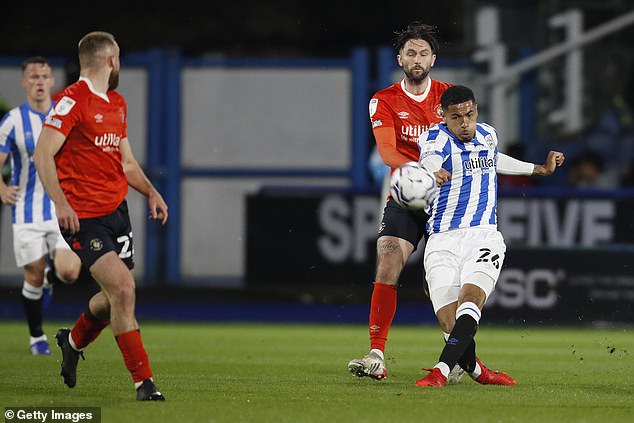 19-year-old Levi Colwill (right), on loan from Chelsea, has impressed in the Terriers’ defence

Forest’s outstanding performer this season has been 21-year-old Brennan Johnson, the local lad and academy graduate who is tipped for a big future at the highest level.

With 19 goals and nine assists this season – including a composed finish for Forest’s second goal at Bramall Lane – Johnson is really gaining a name for himself.

There’s a high probability he will be playing Premier League football next season, either with Forest or one of his many top-level suitors. Forest rejected a £15million offer from Brentford for him back in January. 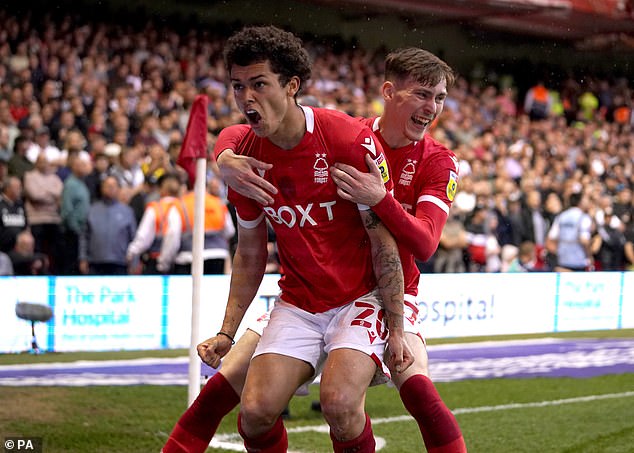 Lewis Grabban, 34, has continued to bang in the goals this season but he is currently sidelined with a hamstring injury.

Cooper had no say in the players Forest brought in on loan at the beginning of the season but he has certainly maximised their output.

Djed Spence, signed from Middlesbrough, has been excellent and proved the ideal fit for Cooper’s flying wing-back system.

James Garner, the 21-year-old midfielder signed on loan from Manchester United, has impressed with his passing composure, while Philip Zinckernagel and Keinan Davis have offered plenty up front. 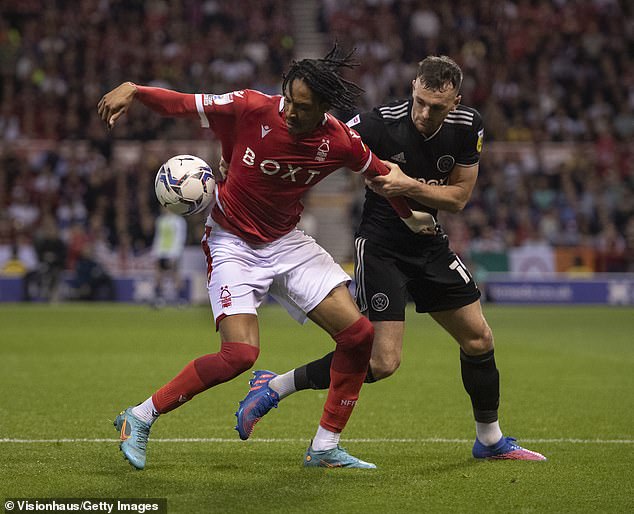 Djed Spence, borrowed from Middlesbrough, has been one of several shrewd loan signings

Then there’s Brice Samba, their eccentric Congolese keeper who produced an heroic performance in the second leg against the Blades.

He made crucial stops in the first 120 minutes and then saved three penalties in the shoot-out having written down instructions on each penalty taker and taped them to his water bottle.