Mike Dean dismissed the Czech defender for violent conduct in stoppage time after he apparently raised his elbow into Aleksandar Mitrovic’s face as they stood on the edge of the box.

Dean had initially waved play on but VAR official Lee Mason advised him to look at replays on the pitchside monitor, leading to the red card that left pundits, fans and Hammers manager David Moyes exasperated. 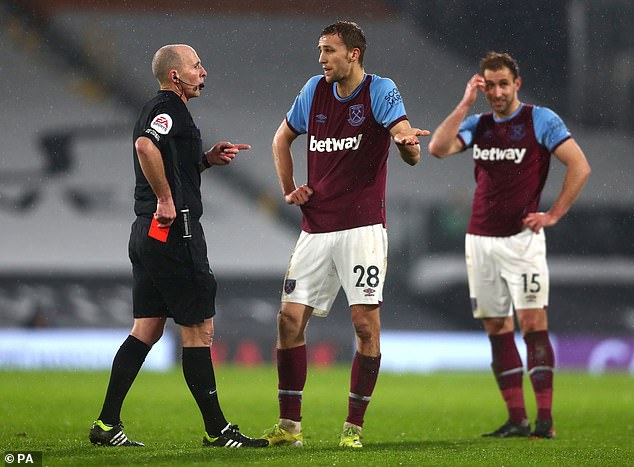 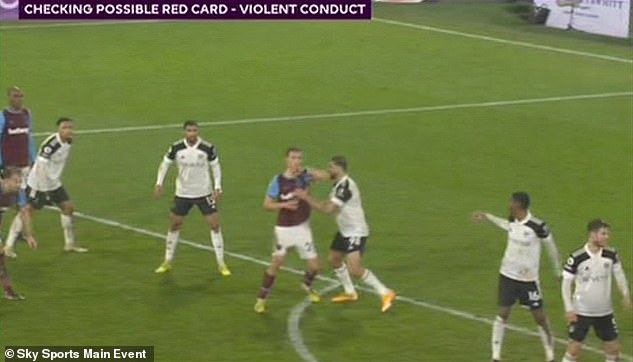 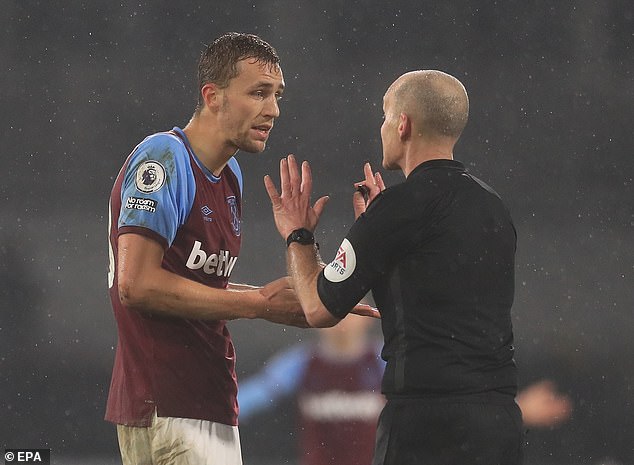 But West Ham will appeal the decision in an effort to get Soucek’s ban overturned.

It could free Soucek to play for the Hammers in their FA Cup fifth round tie with Manchester United on Tuesday night.

He said: ‘What’s happening to our game? We all love football but what is Mike Dean seeing there?

‘He [Soucek] is trying to get his arm out of the way and completely by accident he catches him [Mitrovic] with his elbow.

‘You can see in his face there is completely no intention to hurt an opponent – the fact Mike Dean thinks that’s a red card is a genuine worry to me.

‘VAR has to find a way to stop interfering with the game. They’re making so many bad judgement calls. 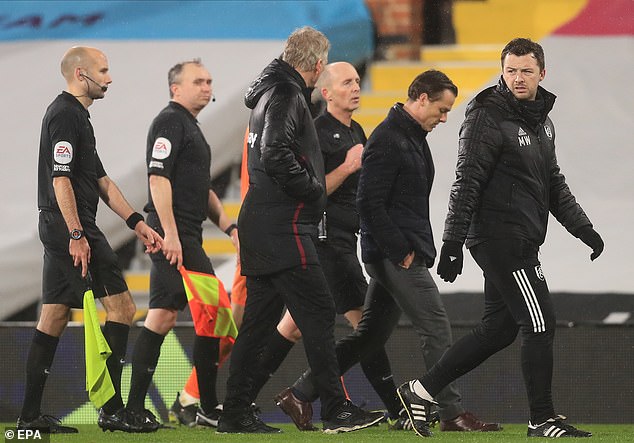 CHRIS FOY: ELBOW WAS NOT A RED CARD OFFENCE

VAR Lee Mason has concentrated on the point of contact and not focused on the bigger picture.

The point of contact shows Soucek’s elbow making contact. Mason will have recommended to referee Mike Dean a review based on what he has seen for possible violent conduct and instructed Dean to have a look at the incident in the referee review area.

All Dean is seeing is Soucek’s elbow being raised. He has therefore decided that it’s a red card offence for violent conduct, but it should not be a red card.

‘I cannot believe there are two respected officials, they know the game, how they’ve got to the result where that’s a red card is beyond me. It’s killing the game.’

BT Sport’s Rio Ferdinand was also left baffled by Dean’s decision and called for greater transparency of the VAR process.

He said: ‘I was thinking of the right word so I wouldn’t get in trouble when explaining this but Mike Dean, this is an embarrassment. He had 22 opportunities to look at it when he went to the side and he still got it wrong. It is a disgrace.

‘What will help us out here, fans and pundits alike, is like in rugby, when the decision is being spoken about – at Stockley Park and with the referee on the side of the pitch – open the airwaves and let us hear that. It might give us then a bit of insight how they’re getting to those decisions and help us understand.

‘This is an educational piece for all of us. VAR is new and we’re coming to terms with it. Let us in.

‘This has to be rescinded and put as a yellow card or something.’

His fellow BT pundit Glenn Hoddle added: ‘That is simple. Any Sunday morning referee will look at that and say, ‘well, he’s just trying to shrug him off, he hasn’t deliberately put his elbow into his face.’

‘Mitrovic has got hold of him and he’s just saying ‘get away, get off me’ and he’s just clipped him. He’s saying, ‘that was a mistake.’

‘If you can’t see that as a referee and show some common sense, you shouldn’t be out there refereeing a Premier League side. That is ridiculous.’

Moyes said he felt ’embarrassed’ for Dean in the latest contentious incident involving him and Mason this week.

The pair were also involved in another controversial decision earlier this week, when Dean sent off Southampton’s Jan Bednarek during a 9-0 defeat by Manchester United, with the club launching a successful appeal that saw the red card rescinded.

‘No, because I think both are good referees and have been throughout their careers,’ Moyes said when asked if the refereeing duo should work together. 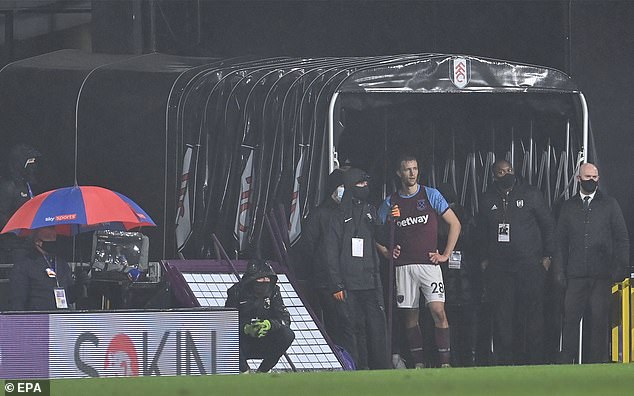 ‘That worries me even more that they’ve made that decision tonight. I’m amazed they’ve even sent them to look at it.

‘Even more amazed that Mike chose to do something with it. What can we do? I don’t think anyone in football or football management are convinced by the rulings we’re involved in.’

‘But they look as if they’re a bit frightened not to do what they think is correct at the moment.’

Moyes said he did not ask Dean to explain himself, adding: ‘I’m actually quite embarrassed for Mike that he would have made that decision.’ 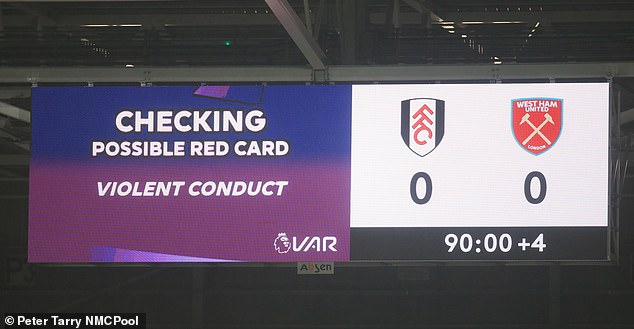 Moyes said that Mitrovic had gone up to tell Dean it was accidental and criticised the decision further.

‘(It was) an accidental coming together which, to show a red card I think was an embarrassing decision.

‘I’m more embarrassed that it would happen and VAR would go and ask him to look at it because I thought it was just a simple accident which should have just said get on with the game and nothing more.’

Taking to Twitter after the game, Soucek wrote: ‘I spoke with Aleksandar Mitrović in and after the game and he said to me that our duel was fair, I thank him for that. Unfortunately, the referee had different opinion.

‘Anyone who knows me knows i would never mean harm to another player. I am sorry for this moment in the otherwise great season. Really nice fair play moment from Aleksandar.’

Several former players, including Gary Lineker, Ian Wright and Jamie Carragher added their thoughts on the Soucek red card on social media after the game.

Match of the Day host Lineker said: ‘You have got to be kidding? That’s not a red card in a million years. So clearly accidental. A nonsense.’

Wright tweeted: ‘All about Mike Dean. Just how he likes it!’ followed by an angry emoji, while Jamie Carragher said: ‘What is going on! That’s not a deliberate elbow!!’

Michael Owen added: ‘Oh no…twice in a week. These monitors seem to somehow make decisions harder to work out,’ while former Bolton striker Kevin Davies tweeted: ‘Wow game has gone if that’s violent conduct, I got out at the right time!’

Referee Dean and VAR Mason came under fire after Dean gave Southampton defender Jan Bednarek a straight red card for a foul in the Saints’ 9-0 defeat against Manchester United.

Bednarek made minimal contact with United striker Anthony Martial but was nonetheless sent off after Dean looked at the pitchside monitor, and the club succeeded in having the Pole’s suspension overturned.

As Sportsmail reported on Wednesday, Southampton were furious about decisions made by Dean and Mason in losses against Aston Villa and United and felt it was unwise for the pair to referee one of their games in the near future. 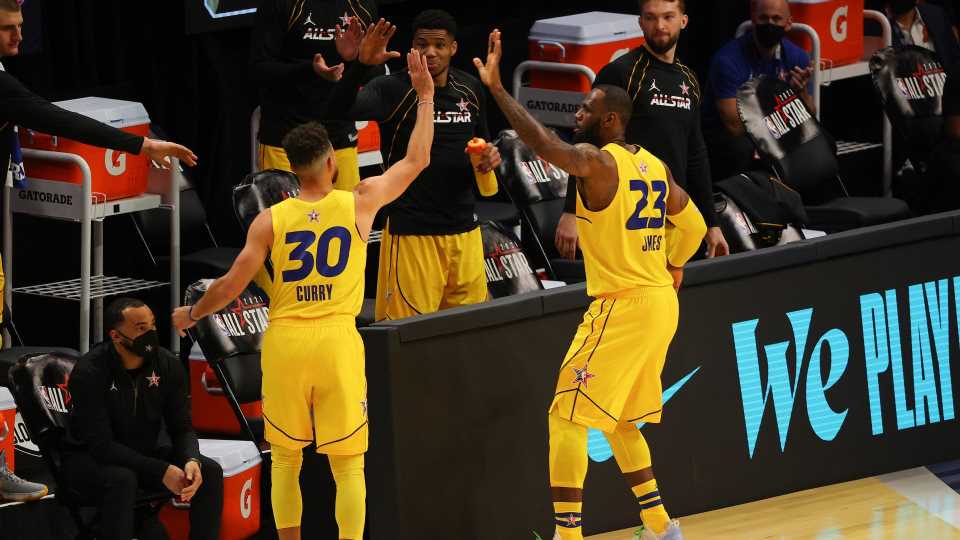 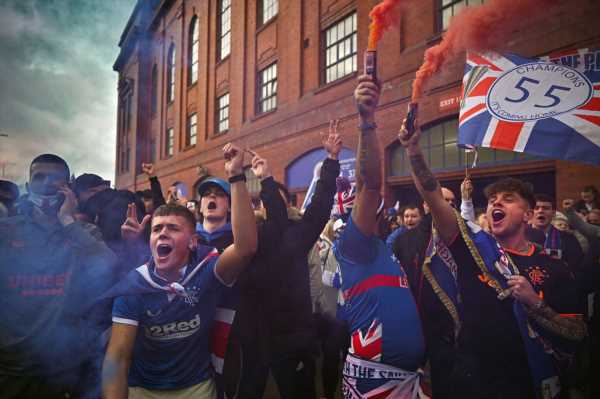