Declan Rice has revealed the rash words from Tottenham manager Jose Mourinho that inspired West Ham to their 2-1 win on Sunday. The victory left the Hammers lying in fourth place in the Premier League and on course for Champions League football next season.

But Spurs boss Mourinho is now the bookies’ favourite to be the next Premier League manager to be sacked, after his side’s fifth defeat in their last six league games left them nine points off the top four.

West Ham skipper Rice revealed: “Mourinho said that at the end of the season there would be no comparison as to where Spurs were going to be, compared to West Ham. ‘We are going to take them.’

“You read that and you think “That is going to make me go out there today and prove you wrong.’ We really wanted to go out and beat them.”

And Rice has urged West Ham to make Jesse Lingard’s move to the club permanent this summer.

MUST READ: Jesse Lingard told Man Utd have ‘moved past him’ after Solskjaer dig 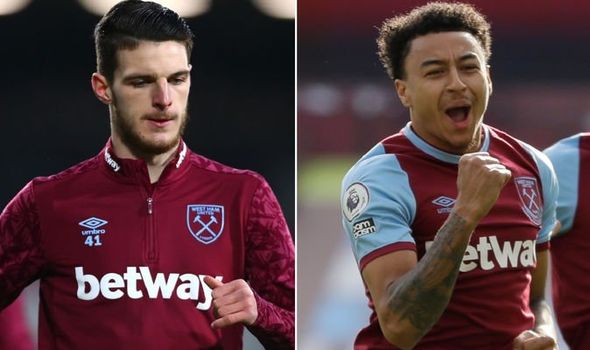 The Hammers signed Manchester United’s England midfielder Lingard, 28, on loan until the end of this season in January.

West Ham paid a £1.5million loan fee for the deal and agreed to cover Lingard’s £100,000-a-week wages – but there is no option to buy at the end of the agreement, with United manager Ole Gunnar Solskjaer keen to keep the England man.

But Lingard has been a revelation at West Ham, since joining, scoring three goals in his four league games, including the decisive strike in the 2-1 win over Tottenham on Sunday that lifted them to fourth place in the Premier League.

Rice now wants his club to seal a permanent deal this summer for the £10m-rated Lingard.

Rice said: “I’m so happy that we have got Jesse here. Hopefully we can do that for much longer, for next season as well. 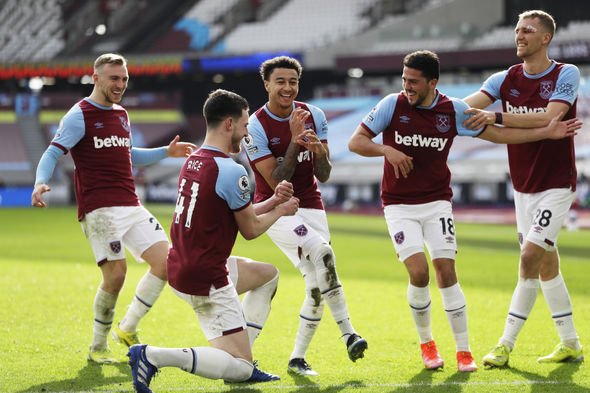 “Jesse is top. I knew this from when I played with him for England. He’s a ridiculously good player. You know when you are playing with a top player, he takes the ball on the half turn, in tight areas, relieves the pressure on you.

“When you give Jesse the ball you know he is going to do something with it. And he has got a great personality as well. The lads have really taken to him.”

The England star has formed a formidable partnership with Czech Republic international Soucek at the base of West Ham’s midfield, one of the key factors in their rise to fourth place in the Premier League, on the back of a run of only one defeat in their last 11 league games.

And Rice also revealed that during the FA Cup defeat at United two weeks ago, Soucek ran an incredible, lung-busting 17 kilometres.

Not only that, but the Czech star carried on playing after medics sealed a cut in his eyebrow which saw blood flowing down his face on Sunday. 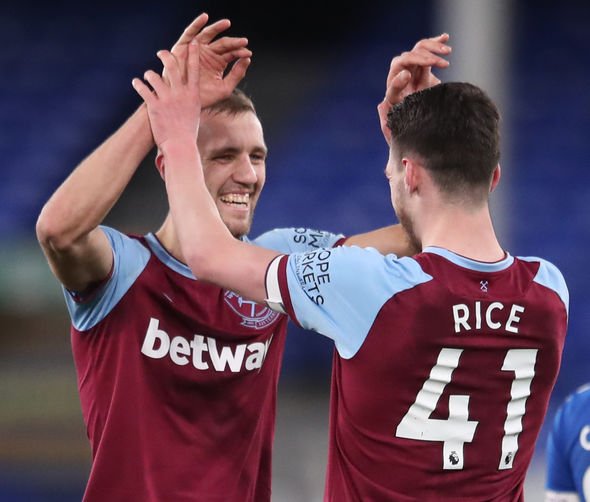 Rice said: “Tomas is so good. I played against him for England and I knew that it was a big game. Now to have him next to me – you don’t realise how much he actually does. He runs, he’s strong, he’s athletic, he gets into the box.

“He does everything you want a midfielder to do. Teams are coming up against Tomas and thinking, “We don’t want to battle with him today. We go hard, he’s going to go even harder.’

“At Manchester United in the FA Cup, we came in two days after, and discovered he had run 17 kilometres in the game. All the lads were going – that’s not normal Tom!

“He’s unbelievable. The season he is having he is probably going to be our player of the year.”

Last season Wolves’ Leander Dendoncker topped the running charts, registering 13.2k run in one game – but Souceck has hammered that record – as well as popping up with eight goals from midfield. 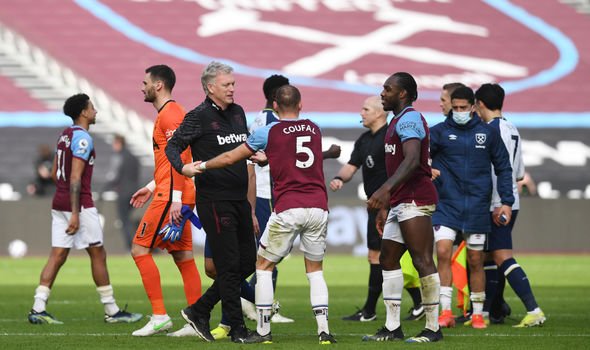 Rice fully admits that he wants Champions League football next season, insisting: “I would be wrong to say that is not something I am thinking about.

“I want to be in those Champions League places. That is where this club deserves to be. We’ve got the quality – that is where we have got to be pushing.

“The next four games are going to define that. We have got Manchester City, Leeds, Man Utd and Arsenal. If we get through those with a good amount of points then it will be down to single figures of games left then. We will be able to start counting down.

“This is the best West Ham team I have been a part of. The unity, the love the lads have got for each other, the mentality has changed completely.

“We don’t fear anybody. The West Ham of last season would have caved in in that second half against Spurs. Now we won’t cave in to anyone.”