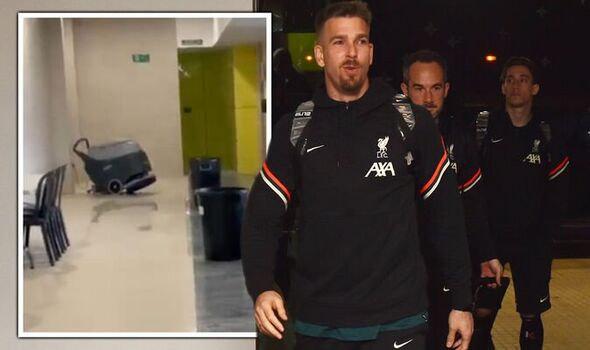 Liverpool’s Champions League semi-final second leg tie against Villarreal has been hit by dreadful weather, with heavy rains battering the Spanish east coast. The government have issued a yellow weather warning for storms and rain which is expected to last until midnight.

And if the harsh conditions continue there could be question marks over whether or not the game will be able to take place as scheduled. A video posted online by talkSPORT journalist Declan McCarthy from inside Villarreal’s Estadio de la Ceramica even showed rain coming through a roof, leading to wet floors inside the concourse.

But he did add in the tweet: “Just arrived in Villarreal, storm like weather here. Pitch looks okay from my POV it’s just everything else. Hopefully this passes through and the game goes ahead.”

Jurgen Klopp and his Liverpool side will be desperately hoping the encounter goes ahead as they look to finish off the job after beating The Yellow Submarine 2-0 in the first leg at Anfield last week.

An own-goal from Villarreal goalkeeper Pervis Estupinan was followed up by a Sadio Mane strike to put the Reds in a commanding position as they continue their pursuit of an unprecedented quadruple. And the last thing they need is a more congested fixture list, with it not being clear when the second leg would be able to be played if it is called off tonight.

Speaking about the match in a press conference earlier this week, Klopp warned his team against complacency, saying: “We know that it is half-time. In the best possible way we have to ignore the result from the first leg. If it were a cup game where only one game decided, and we had to go to Villarreal, we would try to win there.

“We know they will give all they have, that is absolutely clear. With all the things Unai said after the game… it’s going to be a tough one but that is completely fine. Champions League semi-finals should be tough; we never expect them to be easy and this will not be easy. But we played a good game at home and we better play a good game there as well.”

Following the game against Villarreal, Liverpool host top four-chasing Tottenham at the weekend before a trip to face Aston Villa and club legend Steven Gerrard the following Tuesday. And they still have an FA Cup final to look forward to against Chelsea on May 14.

The Reds already have one cup under their belts this season after they beat the Blues on penalty in the Carabao Cup final in February. And they are looking to seek immortality and stake a claim to be arguably the greatest English side in history by winning three more before the end of the campaign.