‘Very, very inspiring’: Why the Matildas want to conjure the spirit of Souttar

Much like everyone else in Australia, Tony Gustavsson was gobsmacked when Harry Souttar made that miraculous last-ditch tackle in Qatar which saved the Socceroos’ bacon against Tunisia and all but wrapped up their first World Cup win in 12 years.

After the match, he let Graham Arnold know. 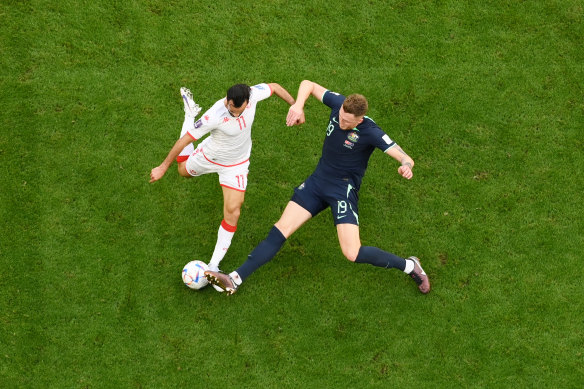 This moment will live long in the memory of Australian soccer fans – and Matildas coach Tony Gustavsson.Credit:Getty

“I took a screenshot of that one, and I sent it to Arnie and said, ‘Hey, what you’ve created with this team, hats off. I’m so proud and so happy,’” the Matildas coach told the Herald and The Age, as he pointed to the goosebumps that had raised on his arms as he relived Souttar’s memorable intervention.

“And then I sent it to the staff chat we have as well, and I said, ‘Hey, this is what it’s about.’ If we can deliver this and promise this, all the other things will [come].”

As Souttar edges closer to a January transfer to an English Premier League side, Gustavsson is unashamedly using him, Arnold and the Socceroos’ spirited campaign as a blueprint of sorts for his players to follow in the crucial months that lie ahead of them.

Not tactically, of course – the Matildas are a different team with different players, a different style, and who sit in a very different place in the global pecking order than Australia’s men do. 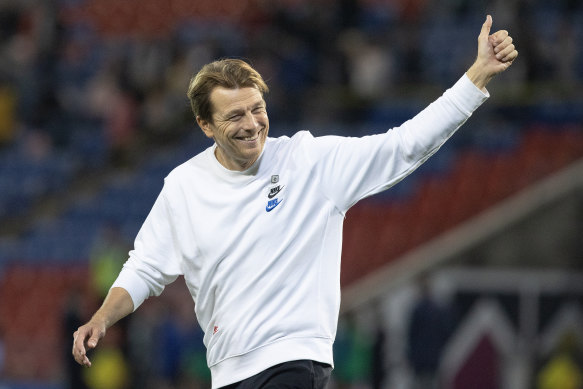 Tony Gustavsson is using the Socceroos’ spirited Qatar campaign as a blueprint for the Matildas’ World Cup run.Credit:Getty

But they were, in his eyes, a textbook example of the sort of manic commitment they must embody at every moment as they enter the home stretch towards their home Women’s World Cup, and their chance to captivate the nation. If the Socceroos could do that, why can’t they go deep?

“It doesn’t matter if it’s men’s football, women’s football, youth or adults – people are people, and what you can be inspired by from a performance like that is the leadership and the camaraderie,” Gustavsson said.

“When you saw that team play in that World Cup, and you saw the Socceroos play, they stood for something. And they stood for a lot of the things that an Aussie team should stand for, and that we always should expect.

“They have that in their DNA, the way they sacrifice for each other, everything from blocking a shot to making a run, to tracking back … everything that they did was very, very inspiring.”

The similarities don’t end there. Like Arnold, Gustavsson has been heavily criticised during his two-year tenure in charge of the Matildas, and there have been numerous calls for him to be sacked due to poor results and performances.

But just like his Socceroos counterpart experienced in Doha, there is a sense that things are finally falling into place for Gustavsson and his team, who seemed to get everything right towards the end of last year with impressive friendly wins over South Africa, Denmark, Sweden and Thailand.

Now the next phase of their World Cup preparation is locked in, with the return of the Cup of Nations friendly tournament that will see them face Czechia, Spain and Jamaica next month in Gosford, Sydney and Newcastle respectively.

These opponents, Gustavsson said, were carefully selected to match who Australia will face in Group D: the Czechs are well-organised and stubburn against top-ranked opponents like Ireland, Jamaica has some dynamic forwards similar to those boasted by Nigeria, and Spain are … well, Spain are Spain, even without two-time Ballon d’Or winner Alexia Putellas, who is injured.

Gustavsson intends to treat the tournament as a “dress rehearsal” in every way for the bigger one that will follow in July and August.

“The players talk about inspiring a generation, uniting the nation, that’s what we want to do. Can we rehearse that, and see, what does that look like? How can we feed off of that in a game?” he said.